The only film both written AND directed by Scott Alexander and Larry Karaszewski, Screwed is an enjoyably silly comedy starring Norm MacDonald in the lead role. The acting isn’t amazing, the plotting is unbelievably stupid, but fans of the star will have a great time with it.

MacDonald plays Willard Fillmore, a man who has spent most of his adult life as a butler/chauffeur/cleaner for the thrifty Miss Crock (Elaine Stritch). She is so mean to him that she won’t even buy him a new suit, making him wear the same one that she had removed from his father’s dead body. Hatching a plan that involves kidnapping her beloved dog, Willard and his friend, Rusty (Dave Chappelle), end up committing to a life of crime, which ends in disaster. The dog escapes, which means Miss Crock is left with the impression that Willard is the one kidnapped. And why would she pay ransom money for Willard?

If you only see one Norm MacDonald movie then you should definitely see Dirty Work, which is his best actual movie, thanks to the gags and supporting cast. But if you see two then you should easily make room for this one, which is a lot of fun. Highlights include a battle with the small dog, the main characters making a video of Willard “pleading for his freedom”, and a meeting with a gross and inappropriate morgue attendant (Danny DeVito).

Even if you were unaware, it’s clear that Alexander and Karaszewski are much more comfortable as writers than directors. There’s no real style or finesse here, from the shot choices to the soundtrack, and the focus is always on simply moving from one gag to the next. That isn’t necessarily the worst thing ever though, especially in a comedy that you don’t expect great cinema from. This isn’t great cinema. It’s just great fun.

MacDonald was never a great leading man, which I am sure he would agree with, but he was used a couple of times in films that managed to use his style without trying to change him. That works well, probably because he seemed to never change for the sake of others anyway. Love or hate him, Norm was unique. Chappelle is a fun co-star here, his nervous energy working well alongside the laconic and dry style of MacDonald. Stritch is good as the tight-fisted employer who mistreats her staff, Sherman Hemsley has a few scenes as another member of staff, Daniel Benzali is a tough detective who doesn’t like loose ends (which is obviously problematic for our leads), and Sarah Silverman has a small role as an ex-girlfriend who might be able to help MacDonald’s character, if she is filled in on the details of the scheme. And DeVito steals a couple of scenes as that aforementioned morgue attendant.

The more I think about it now, the more I can recall that made me heartily chuckle. It may never appear on many “favourite movie” lists, and it won’t ever be discussed in the context of cinema that made an impact on psyches and pop culture, but it is a comedy that delivers a steady stream of good gags. Which makes it worth your time when you just want to laugh. 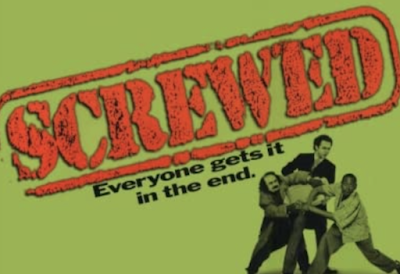