This is the story of Terri Hooley, a man with a passion for music so great that he ended up opening a record store in Belfast, and forming a label, that would support, and hugely influence, the punk music scene in Belfast. Not that either business made any money. Profit was never a motivation for Terri. It was always just about the music.

Hooley is certainly someone who deserves to have their life story shared and celebrated, whether you read any books written about him or (like me) just watch this movie. Taking place during the infamous years of bloodshed and death in Northern Ireland known as The Troubles, Hooley did his best to stay apart from everything he viewed as unnecessary distractions from the music. It was a view that ended up being infectious, allowing him to gather together a number of like-minded individuals, all of them using music in different ways to the same ends. Escape. Whether that is physical or mental.

With the role of Hooley played by Richard Dormer, Good Vibrations is a film lifted by that performance and, appropriately, the music pumping through it. Dormer has a blast, portraying Hooley with charm and savvy, if a lack of business sense, and there’s a lovely supporting role for Jodie Whittaker, playing his partner, Ruth. Aside from the people portraying some key figures in the industry, Kerr Logan as Feargal Sharky and Kieron Forsyth as John Peel, the cast also has consistently solid turns from Liam Cunningham, David Wilmot, Karl Johnson, and many others.

Directors Lisa Barros D’Sa and Glenn Leyburn do a fine job of capturing the time and the place, and conveying that feeling of stumbling on to some life-changing music, and the script, by Colin Carberry and Glenn Patterson, keeps the humour, that seems to have been a central part of Hooley’s nature, juxtaposed alongside the very real threat posed to so many people in Northern Ireland during that time.

It may not be an essential story, although it will inevitably be essential to those impacted by it, and it may not be a standard feelgood film, with the highs and lows leading to a fairytale happy ending, but Good Vibrations mixes the authentic with the fantastical and perfectly illustrates that way in which we can all be transported from mundanity by one great song that resonates through our entire body. It also has a predictably great soundtrack.

You could say that . . . it's well worth keeping an eye open for it. 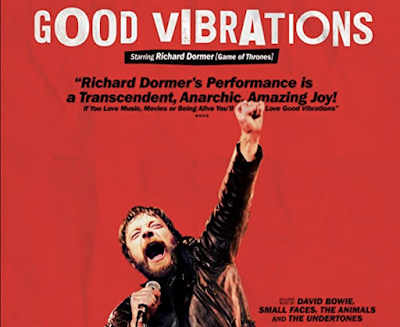