It’s easy to remember the cinematic trends that ended up making a huge impact. The template for buddy cop flicks, for example. Superhero-populated cinematic universes. Films about little creatures that came out not long after Gremlins. But it’s also worth noting the cinematic trends that came and went without making anywhere near the same amount of impact. Like the films that came along after Police Academy. Not only did you get a number of forgettable comedy films about hopeless amateurs being thrown into situations way over their heads, there were also a number of films that tried to cash in on that film’s success by cannily re-using the word “academy” in the title. I have seen Combat Academy (starring Keith Gordon, and also featuring a role for one George Clooney). I never did see Mortuary Academy (which I do want to see). And now I have finally seen Vice Academy.

Written and directed by Rick Sloane, Vice Academy is a paper-thin comedy with very few laughs, although there are one or two there for the more forgiving viewer. The best way to view it is simply as a fan of some of  the stars, and those stars are Linnea Quigley, Ginger Lynn, and Karen Russell. So you should know what kind of film you are in for.

If you think I have forgotten to mention the plot, I haven’t. The plot is irrelevant. Essentially about some hopeless trainees working towards earning a spot in the vice squad. Those trainees are played by Quigley, Russell, and Ken Abraham. They aren’t impressing their teacher/boss (Jayne Hamil), and their progress is being hampered by the “good girl” scheming to ensure they fail (played by Ginger Lynn). But maybe they can accidentally find a way to show everyone how good they are before the end credits roll, even if they still never actually seem to deserve their chances.

Technically, this is lousy. It feels cheap and rushed throughout, the acting from everyone involved is far from great, and the plot could have been written down on the back of a small sachet of salt. There’s nothing of note in any part of the production, from the camerawork to the editing, from the production design to the score. Having said that, it at least sometimes attempts to look more like a film than a cheap project allowing friends to work together in some nice house they have found (*cough* David DeCoteau *cough).

You don’t put on a film like Vice Academy when you want to watch an actual good movie. It is the epitome of something to watch with “beer and pizza”, even if you don’t indulge in either of those things. Switch your brain off, wait for the occasional bit of nudity, and keep your frame of mind receptive to humour that wouldn’t feel out of place in a Fred Olen Ray movie, or even a tame Troma flick. 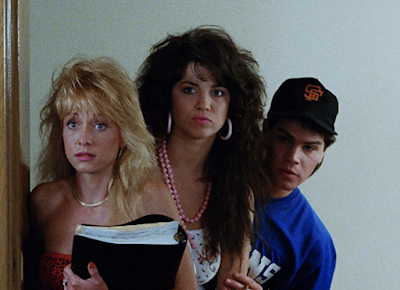