Originally helmed by Alan Ormsby, his directorial role soon taken over by Mark Herrier, Popcorn is a substandard slasher movie boosted by a fun central gimmick that will appeal to fans of the antics of William Castle.

In a bid to raise funds for their film department, a group of university students decided to put on a horror movie marathon in a run-down cinema. The films being shown are wonderfully cheesy, and each one will be accompanied by an interactive feature (a giant mosquito that “flies” over the audience, electric shocks, the always dangerous odor-ama). They will also be accompanied by a number of murders, but those were never part of the plan. The killer seems most intent on targeting and terrorising a young woman named Maggie (Jill Schoelen), but what is the motivation for this night of terror?

When I call Popcorn a substandard slasher, I am not meaning to write it off completely. It is an enjoyable horror film, if a bit daft throughout, but just doesn’t sit alongside the many better slasher movies. If you want some decent gore and a high bodycount then you should look elsewhere, although there are some excellent special effects where they are needed, but if you want something that has a palpable sense of affection for the kind of film experience that forms the core of the plot then you should give this a go. It IS a popcorn horror, and it wants you to remember that throughout.

Schoelen is a decent potential final girl, whether she is wandering through a nightmare sequence in the opening sequence or being astounded when the killer is revealed. Other characters are played by Derek Rydall (playing someone amusingly “mistreated” at every opportunity by a script ensuring he is repaid for bad behaviour),  Dee Wallace (the mother of Schoelen’s character), Kelly Jo Minter, Tom Villard, Malcolm Danare, and Tony Roberts, as well as a number of others all doing absolutely fine for the kind of film that they’re a part of.

As messy as it could have been, considering the departure of Ormsby and the arrival of Herrier, Popcorn is a surprisingly coherent, and enjoyably inventive, horror film that relies on viewers sharing the obvious love for the genre that it has running through it. The technical side of things may seem a bit less inventive than the main “gags”, but it all comes together to create something more than the sum of its parts. And ends up being one I recommend. 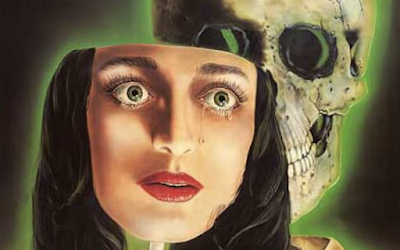