Written and directed by Emanuele De Santi (who also plays the lead character), Adam Chaplin is another one of those films that I just don't understand the love for. It has gore by the bucketload and plenty of energy but the premise of the whole thing is far too slim and the visual style veers between inventive and impressive to downright messy.

Adam is after the men who killed his wife. He's so desperate to find them and exact revenge that he allows himself to be guided by a demon. This dehumanises Adam but also allows him to destroy the corrupt cops of Heaven Valley, the fictional setting for the movie, while making his way to the big boss man (Denny, played by Christian Riva) and his two sons, Ben and Derek (played, respectively, by Paolo Luciani and Giulio De Santi). Those people were responsible for the death of his wife and those people will pay with their lives.

It's a shame that Adam Chaplin could give audiences nothing more than plentiful bloodshed and over the top gore because the thin story that is eked out throughout the runtime is a good one that could easily have had more and more detail added to it. Even the setting itself, Heaven Valley, could have been explored further, which would have made the film feel more like an actual film. De Santi doesn't do a terrible job as director but there's room for a lot of improvement.

As it stands, this is nothing more than a number of FX moments linked by a rambling narrative strand that continually forgets to provide any context for the unfolding action.That doesn't mean that it can't be fun. There are a number of moments that are deliriously entertaining, with blood gushing everywhere in an over the top style reminiscent of those early Sam Raimi and Peter Jackson movies that many horror fans (including myself) still hold dear. Lots of people seem to be happy with this aspect of the film and, indeed, don't even mention any of the numerous shortcomings when recommending it to others so maybe I'm just not seeing something that everyone else is.

The acting by all concerned is just fine. Emanuele De Santi is good in the lead role, Christian Riva has fun playing the main villain and Giulio De Santi, Paolo Luciani, Alessandro Gramanti, Monica Munoz and Valeria Sannino do a good enough job.

I wouldn't say that the script was non-existent but this is definitely a film with very little dialogue. It's more about the style and the gore with dialogue either sketching out a few details or being spoken by characters who seem to think that the words have great meaning and resonance when they don't.

It's a messy film, in more ways than one, but definitely worth a watch if you're a fan of excessive gore. 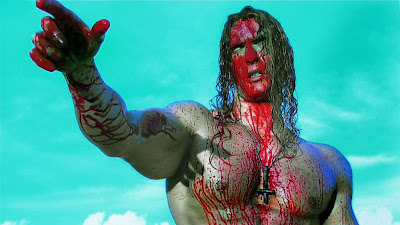