In case you weren't aware of it, I LOVE Creature From The Black Lagoon. Love it. As for the sequel, Revenge Of The Creature, I enjoy that one quite a bit. It was inferior to the original movie by some way but it was still just above average. So I came to view The Creature Walks Among Us with a slight air of trepidation, the third outing was unlikely to be a charm (I thought) but my OCD meant that I had to complete the series.

Frankly, this third outing is better than the second movie because it takes the main, basic premise - gillman in tropical waterways is hunted for by humans who want to poke and prod him - and throws a few very interesting ideas in there.

Perhaps the praise can go to director John Sherwood, who does well with the material, but I'm more tempted (and, I think, rightly so) to save most of my complimentary comments for writer Arthur A. Ross. Ross also wrote the screenplay for the first movie and it's clear that he somehow managed to buck the odds and bring everything together just perfectly for his treatment of basic ideas that could have easily been hokey and laughable.

The cast this time around are a mixed bag but they all do well with the characters that they have to portray - Jeff Morrow isn't the nicest man ever while Leigh Snowden is his poor wife. Rex Reason (what a great name) is very likeable as Dr. Thomas Morgan while Gregg Palmer, Maurice Manson, James Rawley and David McMahon are all fine, as are the other folks onscreen. And let's not forget to mention both Ricou Browning and Don Megowan, the two men responsible for portraying the creature in and out of the water.

Once again, there's some muddying of the waters (no pun intended) but no real doubt as to where our sympathies lie. The creature is what it is, though change may not be out of the question, while the humans involved show a wide selection of negative traits as they capture the poor thing and try to change him into whatever suits their needs.

An excellent end to a consistently enjoyable trilogy, I recommend all three films to those who enjoy classic monster fare. 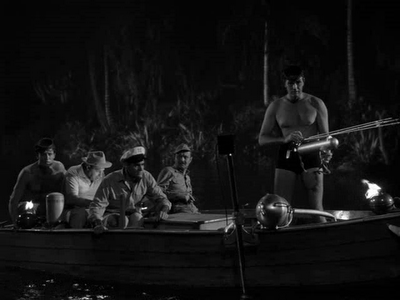