An absolutely fantastic directorial debut from John Singleton (who also wrote the film), Boyz N The Hood holds up to this day as a great movie about people trying to break a cycle of violence and hate. Despite what you may think, if you've never seen the film, this is a movie with some major negative moments that pushes hard to convey a message of positivity. It doesn't glorify or glamourise any of the lifestyle choices that it shows other than one that can see people living happily beside one another.

Cuba Gooding Jr. stars as Tre Styles, a young man who has been brought up for a number of years by his father, Furious Styles (Laurence Fishburne). Furious, despite the name, is a peaceful man who wants to see African Americans opening their eyes to the problems around them and making everything better. He is well aware of the statistics and he wants those numbers to change, especially when it comes to the life that his son will lead. Tre has a few close friends who seem to be on very different paths. Ricky (Morris Chestnut) actually has a chance to do well thanks to a scholarship opportunity but he's also already a daddy at a very young age so it's not going to be easy. Ricky has a brother called Darren AKA Doughboy. Doughboy is an angry young man, happy to waste most of his time relaxing with friends but also quick to reach for a gun if there is any sign of trouble.

I could, indeed maybe should, just wrap up this review now by saying that the movie oozes quality from almost every scene and deserves to be viewed at least once by anyone who loves great acting but everyone should know by now that I like the sound of my own voice (or the font of my own text - is that the blogging equivalent?) so I'll say a little bit more about the movie.

The main thing going against it is predictability. In a lot of ways the film feels fresh and different, especially in the way that Laurence Fishburne brings up Cuba Gooding Jr, but the main beats of the story are so obvious that you can spot them at least half an hour in advance. That doesn't make the movie horrible or unwatchable but it is something that's worth mentioning. There aren't any major surprises here.

Thankfully, the rest of the film works so well that you don't care. It remains the best directorial outing from John Singleton, who announced himself to the world with an astonishingly accomplished debut. It also remains some of the best acting work from the collected actors onscreen. Laurence Fishburne has given a number of great performances over the years but this is certainly up there with his very best. Cuba Gooding Jr. is superb and he's well matched by the different styles of Ice Cube, Morris Chestnut, Regi Green and Dedrick D. Gobert. Angela Bassett has a small, but important, role and so does Regina King while Nia Long plays the most prominent female character and makes herself into someone effectively adorable.

Although there are many ways in which Boyz N The Hood is exactly what you expect it to be there are a number of other ways in which it's completely removed from the preconceptions that viewers may have. Treat yourself by watching it soon if you haven't seen it already. 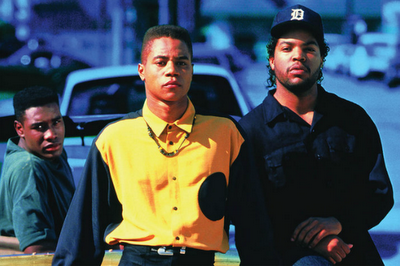