It's hard to think of anyone more influential on the current creme de la creme of Hollywood than Roger Corman. He gave a helping hand to youngsters such as Joe Dante, Martin Scorsese, Francis Ford Coppola, Peter Bogdanovich, John Sayles, Jonathan Demme, Jack Nicholson and many, many more and most of his older b-movies are still viewed by fans with great affection today.

This documentary doesn't really tell you anything new but it does clarify just how great and important in the grand scheme of things the unassuming Mr. Corman really is. It's arguably the case that without this man we wouldn't have half of the movies that we now consider modern classics.

A simple format that works well, this mixes in talking head moments from the past and the present with a number of great clips from the extensive filmography attached to Corman's name, this reminds all movie fans of the radical ideas and movements that have sprung up to push cinema forward. The documentary is, as you would expect, most appealing to fans of exploitation cinema but others should check it out to remind themselves of the humble roots many acclaimed artists grew from.

Director Alex Stapleton moves nice and smoothly through Corman's life, from his very first movies through to his current ongoing relationship with the Syfy Channel, and there are a wealth of soundbites and anecdotes to both entertain and also reveal the warm and giving nature of the man at the centre of the attention.

This may not be quite as much fun as some other recent documentaries focusing on b-movies and exploitation fare (I'm thinking, mainly, of the two superb outings from Mark Hartley that we've had - Not Quite Hollywood and Machete Maidens Unleashed) but it's still essential viewing for those, like myself, who have grown up with a love for the movies of AIP and New World Pictures. A love that tends to grow exponentially in relation to the output of colour-by-numbers mainstream blockbuster movies we get year on year. 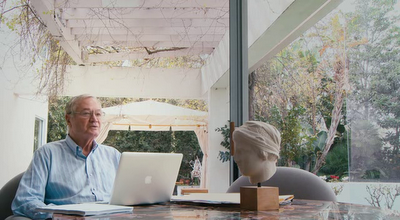