I like Ryan Nicholson. I like him a lot. His movies aren't for the easily offended, by any means, but he makes insane horror movies that make up for their ultra-low budgets by throwing plenty of gore around and usually a fair bit of nudity too.

Which is why I'm surprised that Bleading Lady didn't really entertain me as much as his other works. It has some bloodshed in there, and some nudity, but it feels surprisingly tame when compared to the likes of Gutterballs and Hanger.


The plot concerns Donald Cardini (played by Nicholson regular, Dan Ellis), a man charged with driving actors and crew to and from the set of a low-budget horror movie. It's not the best job in the world but Donald takes pride in it. It also has perks, with the biggest one being his chance to meet scream queen Riversa Red (Sindy Faraguna). Riversa soon warms to Donald, much to the chagrin of her director (Luke, played by Nathan Durec).

There's more to the movie than just that, of course. Throw a stalker into the mix, plenty of amusing observations about creating good horror like they used to make 'em, a bit of unrequited love and a few deaths and you're closer to the full picture.

Dan Ellis is as good as he always is in Ryan Nicholson's movies while Sindy Faraguna is easy to like as the scream queen at a bit of a slump in her career. Nathan Durec is amusing enough as the cocky young director and further support comes from Nick Windebank, Mike Li, Erindera Farga and a few others.

I hope that he doesn't mind me saying this but I always strive to be as honest as possible here - scripts have never been Ryan Nicholson's forte. His scripts certainly aren't the worst to be written in the horror genre but they are often the weakest element of his movies. This proves to be more problematic here when there just isn't enough of the insane violence and bloodshed to make up for it. Maybe I have been desensitised after seeing so many movies of late that have tried their utmost to churn stomachs or maybe this just is a lighter movie from Nicholson. If it's the latter then I applaud him for giving it a go and stretching himself a little bit. The comedy that's referential and reverential of the horror genre works well in places but needs a bit of fine-tuning here and there to make the blend of the whole movie just right.

Despite the fact that I didn't love this movie, I'm still fully behind Nicholson and everything that he sets out to do. His heart is a strong, blood-filled, independence one and that ensures that each of his movies are also that way. Do check out Bleading Lady AKA Star Vehicle, you might like it a bit more than I did.

Bleading Lady IS available at Amazon.com and some of the other usual places but I encourage any potential buyers to go to the Plotdigger Films website and order direct - http://www.plotdigger.com/category/store/dvds/ 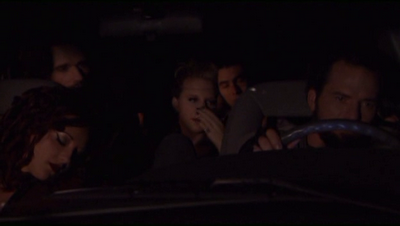