I'm well aware of the fact that I've not seen every Kurt Russell movie ever made (some of them are just nigh-on impossible to get hold of nowadays) but I'll never know how the hell I went so long without hearing about this one. The Deadly Tower is a movie made after lots of Disney fare and features quite an astounding performance from the boy who had been known to so many up to that point as Dexter Riley. It would be a brave move for any actor to make in this day and age so back in 1975 I don't know how the hell Russell had the bottle to go for it. But go for it, he did.

The movie is based on a true story and Kurt plays Charles Whitman, a young man who has decided that he's had enough and that the world ain't a great place to be. Being a nice young psychopath, he decides to help put a lot of other people out of their misery by shooting them dead from the top of a university building. Yes, you read that right. Dexter Riley became a sniper, picking off any innocent people that he could see through his rifle sight. The police are unprepared for this kind of killing spree, the movie was based on a horrific real-life incident that has been credited as a major factor leading to the development of SWAT teams, but do their best to deal with the situation. In fact, young Ramiro Martinez (Richard Yniguez) may end up having more good luck combined with courage than any of his superior officers (played by a great cast of actors including John Forsythe and Clifton James).

Ned Beatty also has a sizeable role in this unflinching and tense thriller and he's just one of the many reasons to seek it out. The script by William Douglas Lansford, from a story that he co-wrote with Antonio Calderon, mixes in the expected melodrama but also keeps things impressively free of sensationalism for most of the runtime. This very bad thing just happens. The direction by Jerry Jameson operates in the same manner and it helps that all of the main actors are excellent.

Characters are established quickly and effectively and everyone who appears onscreen does a great job. It's a film that shows a lot of restraint but also piles on the horror of the situation throughout every main scene just by calmly showing things in a way that feels very, unnervingly, realistic. A hard movie to track down nowadays but I assure you that it's most definitely worth it. 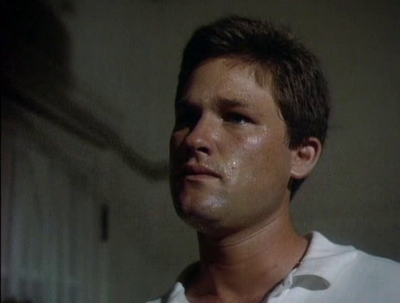