Salo, or the 120 Days of Sodom is a very difficult movie to watch. VERY difficult. In fact, considering the nature of the material, those of you with a sensitive nature, those of you of a young age or even just those of you wanting to retain your lunch should probably read no further.

I've seen nasty films. Sometimes I watch them because it seems like an endurance test/rite of passage (such as these Guinea Pig movies). Yes, I know that's not the best reason to watch movies but it IS a reason and I always try to be honest about such things. Sometimes I watch them because I've been told to check them out while also being warned about their content (as was the case with the Red Room movies). And sometimes, of course, a movie just gains such a strong reputation that I must check it out (which happened with the highly disturbing but nonetheless very good A Serbian Film).

Salo, or the 120 Days of Sodom is rubbish, as far as I'm concerned. I'm sure that people are able to defend it as art, as a metaphor for the cruelty inflicted upon so many during WWII and as so much else but to me it was, and always will be, rubbish.

Set in a Fascist-occupied area of Italy, the film focuses on a number of men who collaborate with each other, and a few female prostitutes, to pick nine boys and nine girls and take them to their private residence, where stories will be told for the sole purpose of sexual arousal and the boys and girls will be degraded, sexually abused and even killed. In between the nastier moments of abuse there are stomach-churning tales mixed with poetic verses, a few jokes and musings on the nature of sex and love and life and death.

Writer-director Pier Paolo Pasolini (the screenplay was co-written by Sergio Citti and takes a lot from the works of the Marquis De Sade) didn't do anything by half here. The movie may start off feeling more restrained but there's actually debauchery, evil and lust dripping from almost every frame.

It's a credit to the cast that they all do a great job. Those playing the male abusers (Paolo Bonacelli, Giorgio Cataldi, Umberto Paolo Quintavalle and Aldo Valletti) were very easy to hate and those being abused were fragile beings that I willed to escape the madhouse they were trapped in.

To be fair, despite my view on the final product, a number of reports from those involved with the film say that the mood on set was quite lighthearted and that the whole thing was really put together in the editing room so, in that respect, credit where credit is due on the technical front.

I just can't rate this highly. Some regard it as a classic and I must be missing something. I saw a number of clumsy metaphors onscreen but nothing that really made me think, especially while my stomach was being churned by what I was seeing.

So, to go back to what I was saying at the very beginning. I have seen my share of very nasty movies. I am not easily offended. I'll see more nasty movies in the future, no doubt. But I won't ever rewatch this one, it just didn't work for me at all and nobody will ever convince me to change my mind (though I encourage anyone to try). 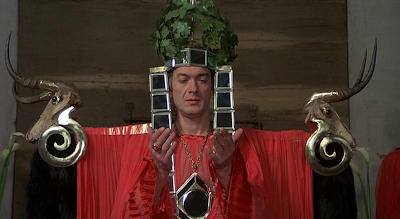