Even as we hurtle forward through time and the 20th century recedes further and further behind us, I am happy to think that there are still many, many people familiar with the work and the sheer star power of Elvis Presley. Personally, I think of him as the single greatest and most iconic solo entertainer of the last century though I am sure that many others disagree and would put forward their own choices.

A TV movie based on the life of Elvis would seem to be a bit redundant. Fans already seem to know everything about him and his life has been picked apart and dissected ever since his premature death in 1977. But this movie was released in 1979. The details of Elvis Presley's life may have been known to many but there was still a certain element of mystery to the man, a mixture of facts with anecdotes with legends with gossip. I don't know exactly how accurate this movie is but it covers a lot of ground and shows Elvis as a great man who also had his share of personal demons (haunted by the stillbirth of his twin brother, always striving to do right by his beloved mother, hugely talented and yet plagued by insecurity).

The film begins with Elvis (played brilliantly by Kurt Russell) waiting to go onstage for his now rightly famous concert at the International Hotel in Las Vegas. He's been out of the spotlight for some time and he's very, very nervous. While wondering just how he will get on, he begins to think back over his life and viewers are taken along on a journey that shows how a young boy from Tupelo, Mississippi, eventually became the king of rock 'n' roll.

This movie, originally a TV movie shown in the USA that was then given a theatrical release in other areas, is important for a number of reasons. The main reason being that it was the first film to pair up Kurt Russell with director John Carpenter (who actually makes a cameo appearance in the movie as the camera moves through a casino setting in the first 5 minutes or so). The two men would go on to make a number of better films, a few of which I'd call solid classics actually, but this is a very good start to their working relationship.  It's also important because Carpenter was given a directorial gig and he delivered, in spades. He might have then gone on to work predominantly with material that wasn't as crowdpleasing but his work attitude has always been just as dependable.

Writer Anthony Lawrence does a great job of picking out moments to focus on while sketching the bigger picture around Elvis but both he and Carpenter are helped massively by a fantastic cast and, of course, the great selection of Elvis songs to use throughout the movie. Russell is, as I have already mentioned, brilliant in the lead role. Shelley Winters is also very good as his mother, probably the biggest single influence in his entire life (well, not counting the wealth of traditional music that he absorbed and incorporated into his work). Season Hubley is very good as young Priscilla, Robert Gray is great as the ever-reliable Red and Charles Cyphers and Pat Hingle both do great as, respectively, Sam Phillips and Colonel Tom Parker. Bing Russell, father of Kurt, plays the father of Elvis and does a fine job while Ed Begley Jr, Joe Mantegna and many others fill out the big supporting cast.

It's not quite the best TV movie ever that I remember it being from my youth but Elvis holds up as a superior biopic that manages to entertain and inform from start to finish. 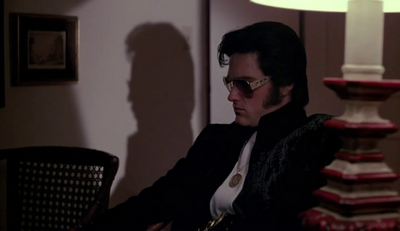