Dolemite is an awful film. It's irredeemably bad in oh so many ways. But if you can view movies as "so bad it's good" then this one goes to the top of the pile. It's so atrocious that it's life-affirmingly brilliant. I can't remember the last time that I laughed so hard and so often at a movie not billed as an outright comedy. This is THE movie to see if you've enjoyed films such as Pootie Tang and the magnificent Black Dynamite. This is where those movies drew a lot of their inspiration from.

The plot revolves around the awesome and badass and sexy and silver-tongued Dolemite (played by Rudy Ray Moore). Dolemite starts the movie in prison on a major drug charge but he is released, thanks to the unflagging support of Queen Bee (Lady Reed), on the condition that he finds out just who set him up and then takes down the drug lords that have been taking his neighbourhood on a downward journey. There are crooked cops to deal with and boss man Willie Green (D'Urville Martin, who also directed the movie) needs to be shown that his business is no longer welcome everywhere.

That's the very basic description of the plot and the movie. I haven't even mentioned the kung fu strippers, the fact that Dolemite loves to use the word "motherfuckers" in every sentence that he can, the groovy character named Creeper who has such a small but oh so memorable role, the boom mike appearing onscreen more than some of the supporting players and fight scenes that show people missing their intended targets by some distance before the intended targets still throw themselves backwards anyway.

The acting is pretty bad from everyone involved. Rudy Ray Moore does a decent job just by being such a larger than life character and D'Urville Martin, to be fair, isn't all that bad as Willie Green but most of the other players (or should that be . . . . playas?) range from the slightly uncomfortable onscreen to the outright bizarre (with the most bizarre being Vainus Rackstraw, who plays Creeper).

The screenplay by Jerry Jones, helped to fruition by Rudy Ray Moore, is often as hilarious as the acting. This is a BAD movie but it's brilliantly bad. There are mistakes in almost every scene and a lot of the material feels as if it's been thrown into the mix at random but all that matters is that you are allowing yourself the pleasure of spending some time with DOLEMITE, motherfucker! That makes everything worthwhile. 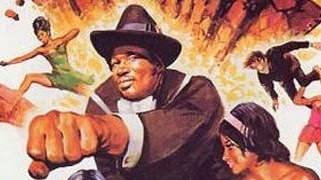