Fred MacMurray takes the lead role in this fairly amusing Disney movie that sees him playing Charley Appleby, a man who is visited by an angel (Harry Morgan) and told that his number is up. This, of course, comes as a surprise to Charley and he immediately starts to worry about getting things in order for his family and trying to make up for lost time. His two young boys treat the father of their neighbouring friend more like their own father, his daughter (Kathleen Cody) is at the age when most of her thoughts revolve around boys (one in the shape of Ed Begley Jr. and one in the shape of Kurt Russell) and his wife (Cloris Leachman) is just used to getting on with things on her own while Charlie works hard and spends his spare time fretting and not being all that much fun. Thankfully, before Charlie has to shuffle off the mortal coil he gets a bit of breathing space, literally, as the angel designated to collect him figures out just why he hasn't died YET and when the exact moment will occur.

Based on the book "The Golden Evenings Of Summer" by Will Stanton (the screenplay was then written by Roswell Rogers) and directed by Vincent McEveety, Charley And The Angel is reminiscent of many other movies about people getting one last chance to change their priorities and put things right in their life. It's also fairly enjoyable after a bit of a lethargic start. In fact, things quickly pick up as soon as Harry Morgan appears and starts having fun in the role of the angel. There's plenty of standard domestic drama but there's also a fun plot strand that sees the two young Appleby boys unwittingly helping some criminals to move large quantities of alcohol.

The cast all do a grand job. MacMurray has given a number of better performances in his career but he's perfectly fine here as the father and husband who is suddenly faced with the realisation of how much he has unwittingly disappointed his loved ones. Cloris Leachman is excellent as the loving wife who starts to worry about her husband's changed personality. Kathleen Cody is bright and bubbly and Begley Jr. and Russell are good enough as the boys vying for her affection. Then we have Harry Morgan, also known as the great Harry Morgan. He's great. I've never seen him be anything less than great but he has a lot of fun here as the playful angel who takes a liking to Charley.

There are others onscreen and they all do well, especially Vincent Van Patten and Scott Kolden as the two youngest Appleby children. The script isn't crammed full of great lines and it's not that sharp but it does enough to keep you interested in the characters and to keep you watching to the very end. Everyone gets a chance to develop nicely after that faltering opening act and there are enough moments of mild amusement to make this worth at least one watch during a rainy afternoon when you have nothing else to hand. Faint praise, I know, but at least it's praise. 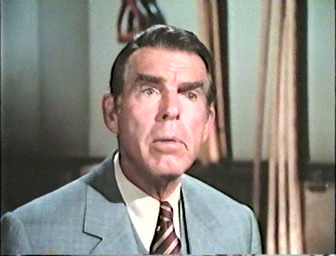