The Amityville house doesn't quite look the same as it did before in this fifth entry in the franchise that should never have limped beyond three (despite how I disliked it, I will accept that the third movie attempts to place itself in line with the other movies).

A bunch of people move into the house and start renovating it but it's not long before things start going bump in the night. And the day. People take far too long to see sense and get out of the house, the scares aren't all that scary (though one dream sequence about a third or halfway into the movie is actually pretty damn good) and the house itself has no character. And the fact that it's not even the same house ruins things almost as much as the evil taking over a household lamp.

The cast are all, in general, pretty poor actors playing pretty unlikeable characters. Kim Coates does well, and it's a shame to see that this is on his CV, and Cassandra Gava isn't too bad but David Stein is awful and only Dawna Wightman, as Debbie, is worse than him. She gives a performance that should easily have won her a roll in Troll 2. Anthony Dean Rubes is just there, he does nothing of note, while Helen Hughes goes way over the top with a character who is at least supposed to be way over the top.

Written by a number of people, and based loosely on the book by Hans Holzer, the script veers from the ploddingly dull to the outright laughable. Director Tom Berry seems happy with it, however, as he does nothing to cover up the weakest element of the movie and adds some more failings to the mix, especially his knack for dragging scenes out and making every potential scare just another extra moment of boredom. 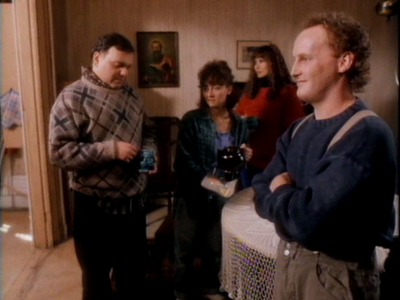