Also known as - Film number three in that 1001 Movies To See Before You Die list. Getting there, slowly but surely.

For anyone interested, it's also available to watch here for free.

It appears on many lists, from lists that contain the movies that you must see to lists of the greatest movies of all time to lists of the most controversial movies ever made. Yes, it would seem that The Birth Of A Nation is the film that must make any selection of movies being chosen to represent the art and development of cinema. There's a very good reason for that. The technical work on display and the sheer scope of the thing is so impressive that the film is regarded as the birth of modern cinema as we know it.

Sadly, the technical accomplishment of the movie has always been overshadowed by the major racism of the content. The film skims over the American Civil War, the assassination of Lincoln and a number of other key moments en route to explaining the birth of the Ku Klux Klan and then showing them as white do-gooders trying to right many wrongs after seeing racial equality go too far and suffering at the hands of their black neighbours and peers.

Mind you, considering that it's based on a book called "The Clansman" by Thomas Dixon (with elements of another novel he wrote entitled "The Leopard's Spots") then I don't think anyone could be all that surprised by the final result.

Directed by D. W. Griffith, the other main point to tell you about the movie is that it's quite dull. It's less lively and energetic than earlier efforts because the sprawling nature of the material and the scale of the story is put over to the audience in a number of set-pieces that often lack context and/or any excitement. And almost every scene is prefaced by the title card telling you what you're about to see. I was reminded of my first time reading "The Coral Island" when I was a young lad. I loved it when I first read it and I still love it now but it was the first time that I'd ever read something that gave a small description of events beneath each chapter heading. Notes can be welcome as a precursor to the main event but there were times in The Birth Of A Nation when the title card simply described the scene being shown immediately after it.

Lillian Gish and Mae Marsh are the main starlets onscreen but Ralph Lewis looks like a black and white Mickey Rourke in his role as Hon. Austin Stoneman, which makes for unintended amusement, and George Siegmann plays the scheming Silas Lynch. 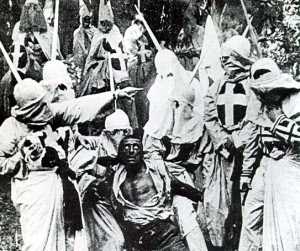