When Jersey Shore Shark Attack begins it doesn't take long to show that it was destined to be shown on the Syfy Channel. Bad special effects are shown from the opening moments and a parade of annoying characters soon reassure the viewer that this isn't going to be anything worth watching for more than a few chuckles while braincells are destroyed. But for those who have seen as many of these movies as I have, and I still don't know why I keep doing it to myself beyond sadomasochism, I must say that the special effects here are BAD, even for this kind of movie. I thought I'd seen a number of horrible CG sharks. These may be the very worst.

I am proud to admit that I've never seen Jersey Shore. Ever. As long as I have breath in my body I will do my utmost to make sure things stay that way. However, I know a little bit about it and like to think that this movie starts off with a style befitting of the show. The main characters are given their freeze-framed introductions, dramas are established within minutes and everyone is quite shallow and annoying. Then some poor CG sharks start eating people.

The main plotline, sharks aside, revolves around a temporary hitch in the relationship of Nooki (played by Melissa Molinaro) and TC (Jeremy Luke) and a rivalry between our heroes and some upper-class twits. It's nothing that other people should actually care about but, then again, neither are any of the plotlines that I've heard about from people discussing Jersey Shore. People that I then make my excuses to and leave. For the purpose of a film riffing off the TV show, it suffices.

As amazing as it seems, four people wrote this film with the main screenplay credits going to Michael Ciminera and Richard Gnolfo. To be fair to those involved in the writing process, it's actually quite amusing in many places but just not amusing enough to detract from the horrible special effects and the fact that the whole thing was brought into being in the first place.

Director John Shepphird puts some great actors in minor roles but that's really the only good thing that he does. Well, okay, he gets the camera pointing the right way most of the time but, as is often the case with these kinds of movies, continuity and style go out of the window fairly quickly (or aren't seen at all, in the case of the latter). He hits the beats required for this type of nonsense but he never really does anything to raise it up a notch.

The real shame about the movie not rising up at all is the waste of the cast. The leads are passable but they are playing Jersey Shore people so I didn't really warm to them. The supporting cast, however, includes people such as Tony Sirico (known to so many after his wonderful turn playing Paulie in The Sopranos), William Atherton, a fleeting appearance from Paul Sorvino and an enjoyable camoe from Joey Fatone.

Give this film a watch when you're after a few laughs and some awful CGI and it will deliver but don't be surprised if you find yourself feeling guilty afterwards because you didn't go with a better option. 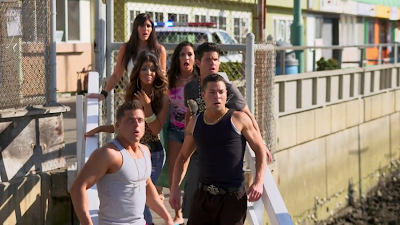