In 2010 The Expendables came along to make action movie fans practically drool with excitement from the opening scene to the closing credits. It was a Sylvester Stallone action movie that catered to fans of a certain kind of dumb fun, fans of 80s action that saw the collateral damage go through the roof as people like Stallone, Schwarzenegger, Willis, etc, did whatever it took to get the bad guy. The Expendables was a homage to those films. The funny thing is that Stallone already starred in the ultimate homage to the 80s action movie, it's just that he actually did it in the 1980s before the affection had grown into nostalgia and before sly wit (no pun intended) could help viewers deal with the many cheesy moments.

For anyone doubting that this is the ultimate homage to 80s action movies I present the following facts. The film stars Stallone and Kurt Russell, two superb stars of the decade (in fact, the Russell role was originally intended to be played by Patrick Swayze, which may have caused all time and matter to grind to a halt in 1989). The main villain is played by Jack Palance but there are also roles for James Hong and, a man synonymous with the 1980s, the late, great Brion James. Oh, Robert Z'Dar also plays a hardass baddie. Is that 80s enough for you yet?

No!! Well, just check out who else we have onscreen in non-villainous roles. A young and beautiful Teri Hatcher is captivating. Geoffrey Lewis is great in his small role. And then there's Michael J. Pollard, who was also so great in Roxanne and a number of other movies.

The script is full of typical buddy-cop moments as Tango (Stallone) and Cash (Russell) are thrown together, framed and subsequently have to spend the rest of the movie throwing snappy insults at each other while trying to prove their innocence and nail the bad guys. Police brutality is the norm when these guys want to get results, plenty of things explode and our heroes get things down through a mix of casual violence and unbelievable luck.

Want some more 80s moments? How about Stallone replying to some cop saying that he thinks he's Rambo with the line "Rambo . . . . . . . is a pussy"? Or even the great little "I hate Danish" line that provides a sly dig at his past relationship with Brigitte Nielsen.

Tango & Cash wasn't a very easy shoot, with director Andrey Konchalovsky being replaced towards the end of the shoot by Albert Magnoli and the script by Randy Feldman not being completed by the time that principal photography began. I'm not sure what the film resembled once the shooting was over but it was shaped and polished by editor Stuart Baird into what you see today, and I like it.

It's ridiculous, completely implausible, and totally enjoyable. If you love anything about the 1980s then you will surely love Tango & Cash. Oh, and the music is by Harold Faltermeyer. Oh yes. The ultimate homage to the movies spawned by the decade of excess, even if it wasn't intended that way. 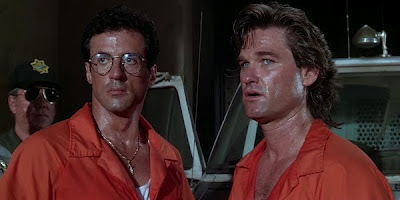