Four cool young people are taken by one other cool young person to explore passageways underneath Berlin. It's something cool to do and they will get a chance to see things that few other people will ever get to see. Unfortunately for them, what with this being a horror movie plot, the stuff they end up getting to see is very hazardous to their health and it's not long until blood, pain and death occupies the passageways with them.

Director Andy Fetscher and writer Martin Thau have taken a familiar premise and mixed in a number of other . . . . . . . . familiar elements. If you're after originality then look elsewhere but if you are after a bit of nastiness and by-the-numbers plotting for this particular subgenre then this will keep you mildly entertained for an hour and a half (and there is one VERY nasty moment that impressed me though it happens after an hour or so of nothing all that exciting). A few early scenes show potential but forget about those because that potential is never realised, with the movie going down, ironically enough, a tried and tested route.

The actors are okay but it's hard to judge their performances based on such stale, weak material. Nathalie Kelley and Nick Eversman have the most screentime but they're not especially likeable. Mind you, neither are the characters played by Max Riemelt, Catherine de Lean or Brenda Koo either. Klaus Stiglmeier is supposed to be someone you're wary of anyway so he fares slightly better.

Tourists in jeopardy, that's the core of this film. It's a premise that can be, and has been, used well in movies over the years - more recently in horrors such as Hostel and Turistas AKA Paradise Lost. The underground setting is also an important factor and, again, it's been used many times, with the likes of Death Line and Creep springing to mind. Sadly, in terms of the central premise and the setting, the film doesn't manage to be as good as any of the other titles that I've just mentioned and the fact that it's so derivative of some, or even all, of them makes it inevitable that unfair comparisons are made while watching the thing.

Is it a bad film? No, not really, but I can't honestly say that it's a good film either. It lands slap bang in the mid-range and that's a big disappointment, considering the potential that it had. 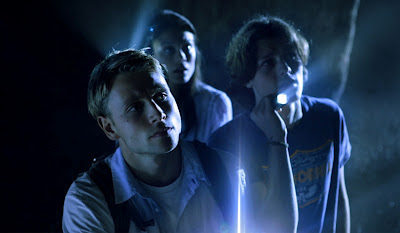