If you have an interest in movies that are a little removed from the mainstream, if you love b-movies and horror and sci-fi films as I do or if you just keep up to date with any release that quickly builds up a fervent fanbase then you will have heard of Iron Sky. If the name doesn't ring a bell then you may have heard it dismissively described as "that mad film about moon Nazis".

What you may be unaware of is just how well Iron Sky mixes the ridiculous and the dumb with a healthy dollop of smarts and satire. It is, in many ways, stupid and it knows it. Yet it also knows just how to wring the most laughs from the concept while also delivering some fun action moments and poking fun at world politics and the global leadership assumed by America in a way that would please Trey Parker and Matt Stone.

The plot is deceptively simple. We can go back to the phrase "that mad film about moon Nazis". When a couple of astronauts land on the moon and have a look around they find a whole bunch of Nazis living quite happily there while they prepare for the day when they will return to Earth as an invading force. The Nazis are quite shocked that one of the astronauts is black (James Washington, played by Christopher Kirby) and don't realise quite how much has changed in their absence. Mr. Washington has actually been sent to the moon by a female president (played by Stephanie Paul) who has used the slogan "Black to the moon? Yes we can" and that same president is about to get a big surprise thanks to the mission. A surprise that she may be able to spin to her advantage, thanks to the help of her assistant Vivian Wagner (Peta Sergeant).

Iron Sky is also well known to many people today because of the fact that it used crowdfunding to get more than 10% of the required budget. This may lead viewers to expect an amusing movie that can't help looking cheap but nothing could be further from the truth. Considering the relatively low budget, every penny has been wisely spent and almost every frame looks gorgeous. The plentiful visual effects are nicely stylised and very, VERY well done.

Thankfully, the fact that the special effects actually LOOK special doesn't mean that the cast members were a secondary concern. From Kirby as the traumatised astronaut to Paul as the president to Sergeant as her assistant and Gotz Otto and Julia Dietze as the two main Nazis who initiate contact with Earth - everyone does a great job, playing it relatively straight but keeping the tone of every moment just right. There's also a small role for Udo Kier. As well as giving decent performances, I have to mention that Peta Sergeant and Julia Dietze also have the advantage of being very attractive to look at. As I'm sure Gotz Otto is, from the female perspective. Why do I have to mention that? Well, it's just to forewarn any red-blooded males who are about to watch the film that they may want to try to contain their excitement while viewing a woman onscreen who is, don't forget, wearing a Nazi uniform.

Timo Vuorensola is the director and he also wrote the movie, albeit with a bit of help from others including those who came up with the original concept in the first place, so he can accept most of the deserved praise. The film could have easily gone too far one way or the other. It's ridiculous and yet grounds everything in a reality created for the movie that stops it all getting far too ridiculous. It comments on world politics and, indeed, the world of "spin" but does so without bringing things to a grinding halt. It has a bit of everything in the mix but never feels like it has simply tried to cram in too much.

If you already suspect that you might enjoy this movie then I'm pretty sure that you will. It delivers exactly what you'd expect it to deliver, and then puts a little extra on top for good measure. I'll be buying this one to add to my collection ASAP. 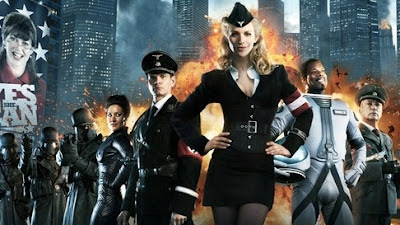