Killer cars. They've appeared in movies before and they're often a lot of fun. Sometimes they're driven by a killer driver and sometimes they're just evil machines that can drive themselves around. Personally, I think that Christine remains at the top of the pile in this particular subgenre so that's the movie that newcomers have to get close to. I won't beat around the bush here, Hybrid doesn't come close enough. It's not terrible but it stays just below average throughout.

The basic premise is a good one - a killer car. Only this isn't actually a car. It's something else, something that can imitate numerous vehicles in a way that helps it to catch food. And when I say food I mean people. After a bit of a smash up the car ends up in a garage and it's not long until those working in the garage start to realise that something is up. Unfortunately, by the time the full extent of the danger that they're in hits them it's too late for them to leave. They are, in fact, trapped.

Well, when I say that they're trapped I actually mean that the audience is supposed to believe that they're trapped. Being in a big, multi-level garage doesn't exactly help to make the movie claustrophobic and tense. It's not even an underground garage like the one in the enjoyable P2. And then there's the fact that the reason everyone is trapped inside is because the boss man (Oded Fehr) is a big asshole, the kind of guy who gets his emergency exits welded shut to stop break-ins.

Fairly capably directed by Eric Valette, Hybrid suffers most of all from a pretty weak script by Benjamin Carr being handled by a fairly weak cast. Not everyone is bad, mind you, but Fehr is stuck with such a bad character that it's impossible to warm to him (which is fine and dandy sometimes but just doesn't work for this movie) and Ryan Kennedy is sadly underused. The lead actress, Shannon Beckner playing Tilda, just isn't very good. I'm sorry to say it, she may be a lovely person in real life, but she simply doesn't cut it in this role. She puts up with too much crap from others, making her hard to like, and then when she finally becomes assertive and develops into the potential heroine of the piece . . . . . . . . . it's not only unbelievable but it's also a case of too little too late.

There are some good ideas here though. That enjoyable premise is fun and the fact that the car isn't really a car allows for some successful "car sneaking up on someone" scenes that usually irritate me so much (yep, despite my ability to suspend disbelief for most things I have some pet peeves and "the superquiet vehicle that nobody notices until it screeches and/or makes an impact" is one of them). It's a shame that there wasn't much else in the movie to make it worthwhile, one or two decent moments aside. Even the CGI disappoints when it is needed most.

With a bit of tweaking here and there and some more money available, this could have been a very enjoyable film. As it stands, it's stuck just below average but the director is someone to keep an eye on (as fans of his 2002 film, Malefique, already knew). 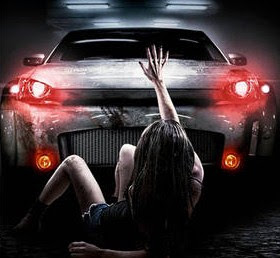