You might know of Paddy Breathnach already if you note down the names of people involved with movies that you disliked because a LOT of people disliked Shrooms.  I only ended up giving it a generous 5/10 after a rewatch allowed me to enjoy individual elements while my anger abated. Red Mist AKA Freakdog is a slight improvement over Shrooms but it only just provides a better viewing experience, mainly thanks to the echoes of Patrick. The main thing dragging it down is . . . . . . . . . . . well, I'll get to that shortly.

Andrew Lee Potts plays Kenneth, a shy and stuttering hospital worker who likes to look at corpses and cut himself. He's not a well man and doesn't have the best social skills but that doesn't stop him from trying to get close to Catherine (Arielle Kebbel), a young woman learning her craft at the hospital. When Catherine is out one evening with a group of her colleagues (played by Alex Wyndham, Katie McGrath, Sarah Carter and Martin Compston) things take a turn for the worse when Kenneth approaches the group and is brutally rebuffed. He then tells them that he has footage on his phone of one of them sneaking drugs from the pharmacy, drugs that they have been using for recreational purposes. The group then decide to let Kenneth join in with their fun but only so that they can spike his drink and teach him a lesson. As is often the case, things go wrong and Kenneth ends up in a coma. Catherine feels incredibly guilty but her colleagues just want everything to be over so that they can get on with their lives. In an attempt to help out, Catherine visits the comatose Kenneth and starts to secretly administer some experimental drugs that she hopes may help his condition. That's when people start acting as if they're possessed while trying to kill everyone who helped put Kenneth where he is. Could Kenneth be reaching out from his hospital bed? Is it the experimental drug?

The idea may not be an original one but it's not bad. The screenplay by Spence Wright covers familiar ground and it sits very much at the mid-point of quality when it comes to this type of fare. Breathnach does okay with the direction, though it would have been nice to see things getting a bit nastier during the death scenes, and the cast features those already mentioned plus Stephen Dillane and MyAnna Buring (I'll admit it, I like to watch the lovely Miss Buring in anything, so sue me).

BUT, and it is a big but (so big that Sir Mix-A-Lot himself may pop along to admire it), everything in the film from the acting to the unfolding plot to the dialogue exchanges between characters is undone by one huge mis-step. For some reason, those involved decided to try and make the whole thing appear as if it was set in America. Not in any convincing way, you understand, as that would take too much effort and care. Oh no, this movie being set in America means that we get a horrible mix of accents from the poor actors onscreen, a few establishing shots of somewhere that we're supposed to accept is America and then . . . . . . . . . . . well, that's it. There's not really anything else to help convince viewers that they're watching a movie set in the USA. It's as if Paddy Breathnach and Spence Wright watched Slaughter High and thought "well, we can make something as bad as that". Yet I still love Slaughter High to this day, it has a goofy charm to it and feels like those involved actually did their best with what they had. This movie misses that, which is why it also ends up with a generous 5/10 and why I am now wondering whether or not I should stop being so easily pleased. 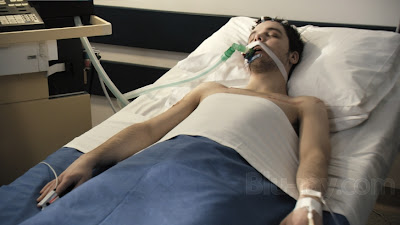