A star-studded cast, many of them returning to reprise their roles from The Three Musketeers, have a lot of fun in this swashbuckling romp that still provides decent entertainment today even if it has lost some of its magic. I remember liking this a lot more when I saw it some years ago but I can't guarantee that I have not confused it with the other films or just blended all of the movies (the two mentioned and also The Return Of The Musketeers) in to one big Musketeering party.

The plot is all about the musketeers, the scheming Milady, other schemers scheming and nations teetering on the brink of war. The details are unimportant, really, as this is more about a bunch of talented people having fun onscreen.

Director Richard  Lester once again works with a script by the talented George Macdonald Fraser (who has fun with the characters from the original Alexandre Dumas novel) and the emphasis is once again on big laughs, high drama and great stunts as opposed to historical accuracy and genuine tension.

And what of that all-star cast? The musketeers themselves are played by Oliver Reed, Richard Chamberlain, Frank Finlay and Michael York. Raquel Welch is the lovely Constance while Faye Dunaway is the beautiful and dangerous Milady. Christopher Lee is Rochefort and Charlton Heston has fun in the role of Cardinal Richelieu. There are also small roles for Simon Ward, Roy Kinnear, Geraldine Chaplin and Sybil Danning.

It's never dull but all involved have something better tucked away in their filmography, even if it's just one of the other Musketeer movies. Mind you, this is still a solid choice to brighten up your day when you're stuck indoors and the weather outside is miserable. It's almost like being reminded of how you could be as a child - boisterous, apparently indestructible and always ready to cut down enemies with rapier wit and an actual . . . . . . . . rapier (albeit a plastic one from the toyshop). I don't consider that a terrible thing. 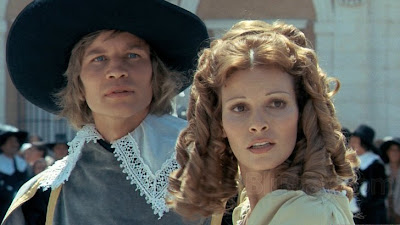