Children Of The Corn II: The Final Sacrifice (1992)

Absolutely inept in almost every way, that's the first thing to say immediately about this movie. I laughed a number of times at how bad it was but, for the most part, it was actually a painful experience. Bad acting comes from almost everyone involved, the script by A. L. Katz and Gilbert Adler is atrocious and the direction from David Price ensures that the final result is an equal mix of dull moments, stupid moments (like the two men in a van who think a twister is approaching who then decide to get out of the van . . . . . . . . . . . . . . . and panic a bit before one man gets back in the van) and completely over the top moments.

I can't even be bothered to explain the plot, the film is so bad and sloppy that it makes me question whether or not I should risk giving any readers brain damage by actually covering the events. Here is the very brief version. The deceased adult residents of Gaitlin have been found and people are shocked. So shocked, apparently, that they don't suspect the involvement of any of the surviving children and instead seek to rehouse them. Which allows the kids to wander about in groups, have their little rituals in the cornfields and generally be creepy in a completely, blindingly obvious way.

Rosalind Allen is the only person onscreen I could actually tolerate while the rest should just be named and shamed - Terence Knox and Paul Scherrer are annoying as hell as a bickering father and son, Ryan Bollman is just horrible as Micah, Christie Clark does slightly better than most of the cast in her small role (playing Lacey), Ned Romero is brought low by some of the worst moments in a script full of bad moments and Marty Terry is shockingly bad in two roles.

There are a few references to The Wizard Of Oz to watch out for, it may help to keep you awake as the film meanders on, but nothing else makes this remotely watchable. I would recommend anyone and everyone to avoid this at all costs. 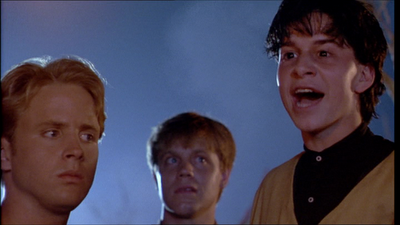