Trey Parker and Matt Stone star as Joe Cooper and Doug Remer, respectively, in this sports comedy that's really just an excuse to cram as many gags as possible into every scene and to highlight the comedy value of a really good insult.

"Coop" and Remer are a pair of losers, but they're a pair of losers who create a sport that becomes very, very popular in America. It's a cross between basketball and baseball. One player tries to throw a ball that will land in the basket, with the points scored determined by his position, while the opposing team try to psyche them out with various insults. Thanks to a general lack of ambition, and a wish to keep their sport pure, the guys manage to keep baseketball as something more about the actual players and gameplay than money and sponsorship deals. But scheming Baxter Cain (Robert Vaughn) really wants to change that.

Despite feeling very much like a Trey Parker and Matt Stone movie, BASEketball only makes use of the duo in an acting capacity, although it certainly feels like one or two moments came straight from their warped little minds (including a fantastic sneak preview of "Cartman"). The script was actually co-written by director David Zucker, along with Robert LoCash, Lewis Friedman and Jeff Wright. But Parker and Stone made sure they could rewrite enough to keep everything nicely in line with their own sensibilities.

The leading men may not be the most versatile performers, but they're perfect for these roles, playing two dudes who just have a lot of fun, realise that others enjoy what they do, and then have to walk a tightrope between doing well in life and selling out. It's not an unfamiliar scenario for them to deal with. The other main team member, Squeak Scolari (played by Dian Bachar), is very funny, and very often the butt of the jokes.
Elsewhere in the cast, Yasmine Bleeth has fun as the woman that "Coop" falls for, Jenny McCarthy and Ernest Borgnine provide some laughs, and Vaughn is amusingly conniving and unflappable, even while dealing with idiots around him.

Zucker has, of course, been involved with many great comedies in his career, many of them better known than this one, but BASEketball is so good that I still rank it up there with his best stuff. If you've not seen it yet then get to it whenever you can. It's guaranteed to make you laugh.* 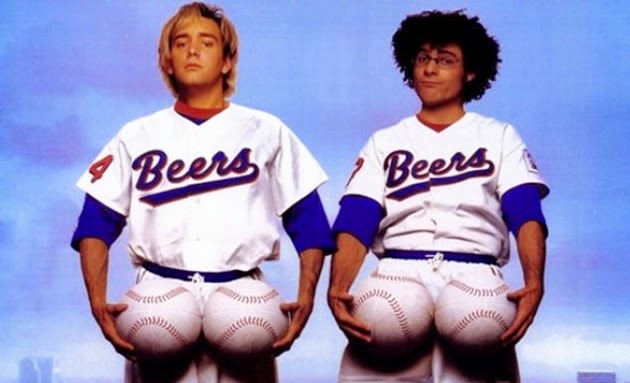 *Comedy is subjective, everyone has a different sense of humour, any guarantees offered here by the author do not count as actual guarantees.
Posted by Tylerandjack at 07:00