The character of Kevin the stroppy teenager was very funny when he first appeared. One of many creations from famous UK TV comedian Harry Enfield, he was an amusing exaggeration of the worst aspects of those turbulent teenage years. Unfortunately, he wasn't as funny by the turn of the century, and this attempt to take the thin gag and stretch it further, into a full movie, stands up now as nothing more than a bit of an embarrassment.

Enfield is Kevin, of course, and Kathy Burke plays his mate, Perry. The two obsess over girls and getting a sex life, and they look to have the best chance ever to impress some lovely young ladies when they're allowed to go on holiday to Ibiza. Unfortunately, Kevin's parents (James Fleet and Louisa Rix) are also along for the holiday. Will Kevin and Perry get to make their dreams come true? Will they get to make out with some young ladies (mainly the two played by Tabitha Wady and Laura Fraser)? And will they somehow manage to convince people that they have the potential to be superstar DJs, just like Eyeball Paul (Rhys Ifans)?

Kevin & Perry Go Large has a pretty good soundtrack, so there's that. But there's really nothing else, with the exception of a brilliant turn from Ifans as the uncaring DJ who strings the lads along while promising to play their song at his club. Director Ed Bye has a career full of TV work (including Red Dwarf, which may hold up as the best thing that he's worked on) but he proves able to take this small-screen work and bulk it up enough for the cinema screen. It's just a shame that he can't do anything to detract from the sheer awfulness of the script.

Remember in Caddyshack when someone dropped a chocolate bar in the swimming pool and everyone thought that it was a floating piece of human waste? Well, this movie has a similiar scene, except there's no chocolate bar involved. It's just a piece of shit (which is a fitting summation of the entire film). Yes, that's the level of the script, written by Enfield and Dave Cummings.

Enfield is almost consistently annoying, Burke is a bit more fun, and I already mentioned how good Ifans is, but there just isn't anyone onscreen that viewers will enjoy spending time with. Fleet and Rix are the most pleasant, but maybe teenagers will disagree with me on that point. Paul Whitehouse has a fun cameo, and Steven O'Donnell gets a couple of good moments as Big Baz, but that's really all of the minor pleasures of the movie covered.

I'm sure there are people who still enjoy this. I am not one of them, however, and recommend avoiding it completely. 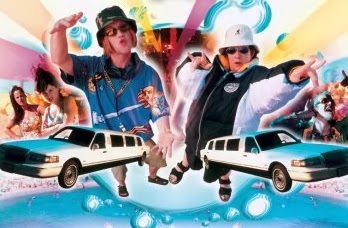