Another slice of comedic brilliance from the ZAZ team (David Zucker, Jim Abrahams and Jerry Zucker), Top Secret! remains, arguably, their most undervalued outing. It's easily as good as The Naked Gun, and it even comes close to the brilliance of Airplane!

Val Kilmer stars, in his first feature role, as smooth American rock and roll star, Nick Rivers. Nick is due to play a major gig in East Germany, unaware that his presence is viewed as nothing more than a distraction by East Germany, while some dastardly types plan the overthrow of the Western world. It's not long, however, until Nick is dragged into some danger and excitement by the lovely Hillary Flammond (Lucy Gutteridge), and then it's just a hop, skip and a straightened rug to an active role in the resistance movement.

Think of the zaniness that you love about other ZAZ movies, add some wonderful musical moments and a layer of exuberant surrealism, and you may start to understand why fans of Top Secret! tend to leap to its defence whenever it is overlooked or dismissed in any conversation about great comedy films. The jokes range from the sublime to the ridiculous, as you'd expect from the people involved, but the sublime gags are even more sublime than usual. Having said that, never underestimate the value of lines such as the following: "I know a little German. He's sitting over there."
And if you're not amused by a character named Deja Vu having his first line of dialogue questioning whether or not he has met someone before then I doubt you have a funny bone.

Kilmer is great in the lead role, every inch the cocky American teen idol, while Gutteridge is a lot of fun as the woman who drags him into the middle of the resistance movement. Warren Clarke makes a good villain, Christopher Villiers is amusing as the leader of the resistance, Michael Gough isn't in the movie for long enough, but gets one or two great lines, and Jim Carter steals a couple of scenes as the aforementioned Deja Vu.

If you like movies of this ilk, and have yet to enjoy the laughs that Top Secret! can offer, then I urge you to get to it as soon as possible. You won't be disappointed. 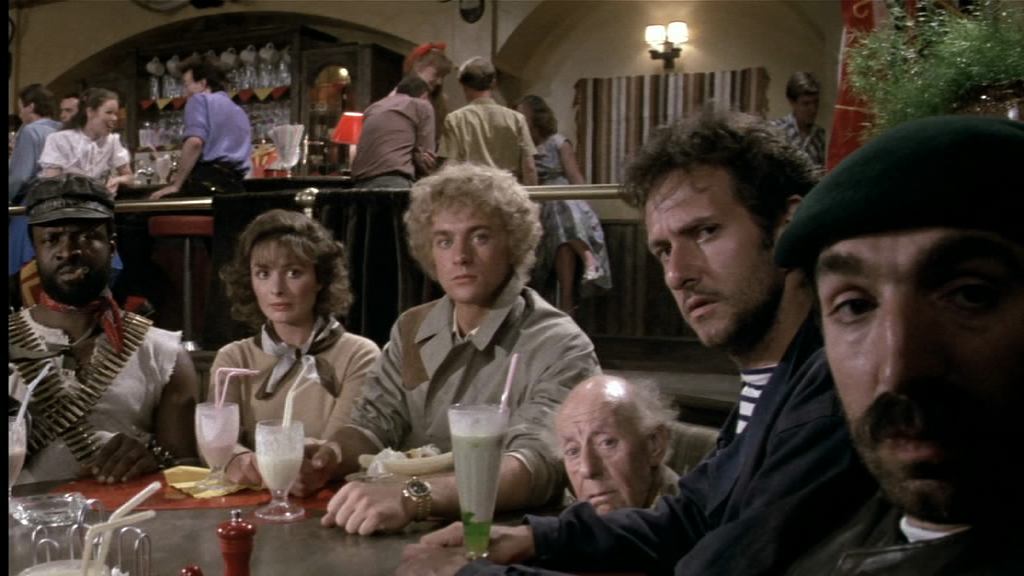