A Fish Called Wanda is a great comedy. A modern classic, in my opinion, thanks to the mix of dialogue, cast, characters and situations. Unfortunately, it also seemed to start the advertising trend that plagues British hits to this day. Every comedy that came along after it would find someone able to say that it was "the best British comedy since A Fish Called Wanda". Until Richard Curtis came along, at least, and then Four Weddings & A Funeral took over, soon superceded by The Full Monty and, well, every other big British success at the box office since then. But let's get back to Wanda.

It's the story of a daring robbery, and a little double-cross by some members of the team. The lovely Wanda (Jamie Lee Curtis) is the woman with the grand plan, and she will use all of her feminine wiles to get what she wants. Her partner is Otto (Kevin Kline), a man pretending to be her brother. Otto is a great man with a weapon, but he's not as smart as he thinks he is. Just don't call him stupid. Wanda and Otto are working together to find out where the diamonds from their big robbery have been hidden. George (Tom Georgeson), the man who planned and led the robbery, has been arrested and, funnily enough, doesn't trust anyone. He has moved the loot, and only Ken (Michael Palin) has the key to use whenever the location is revealed. Meanwhile, Archie Leach (John Cleese) is the man defending George in court. He's the one George may tell about the whereabouts of the diamonds if he needs to make a deal, so he's the one that Wanda needs to get close to. Very close.

Directed by Charles Crichton, with a script written by Cleese, this is a film that stands up alongside his earlier classics such as The Lavender Hill Mob. In fact, it's hard to think of a more fitting final film for the man, so perfectly does it mix the old with the new by juxtaposing the repressed Brits alongside the more outlandish Americans. There aren't too many flourishes, but the material doesn't need it.

The cast are all clearly having a lot of fun (with Kline even snagging a surprising Oscar for his supporting role - the Academy often overlooks/dismisses such comedic material, in my experience) and the clash between Curtis and Kline whenever they're onscreen alongside Palin or Cleese is always as entertaining as it is exaggerated. Georgeson has less to do, but is just fine, while Maria Aitken is excellent in a rather thankless role, playing the rich, self-absorbed, wife of Leach. She's a reminder of what happens to people who allow their dreams and energies to die for the sake of a good place in society and a nice house.

Full of so many great lines and moments, from the many stupid sentences spoken by Otto, to the attempts made by stuttering Ken to kill a key witness (Patricia Hayes), to the famous sight of John Cleese stripping off while speaking in a foreign language, to the even more famous sight of Palin with chips up his nose, this is a film that still proves as rewatchable and laugh-inducing today as it did when first released. 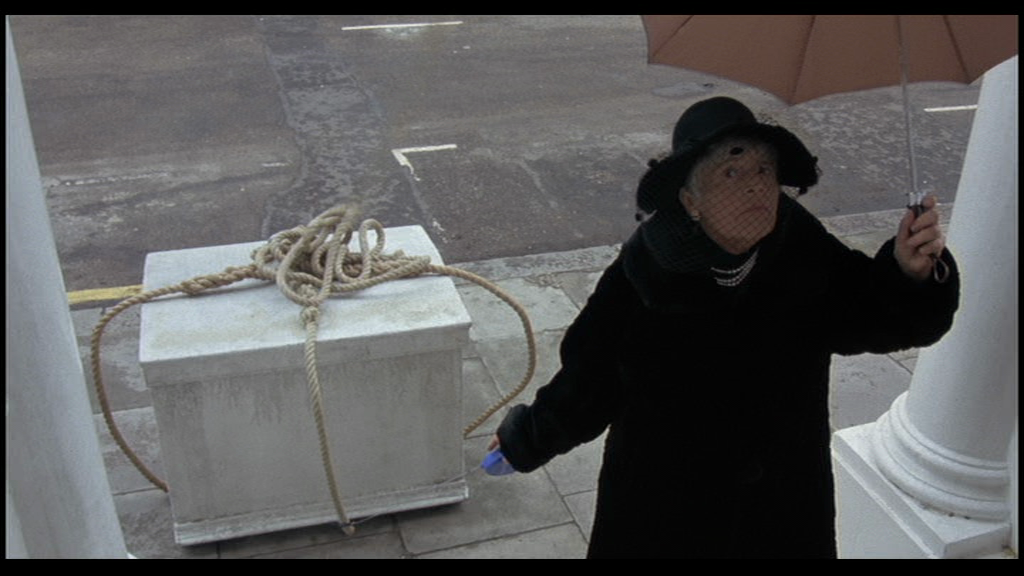