It would only be a fool, surely, who would come along and call The General anything less than a stone cold classic. Well, I AM that fool. Before anyone starts making voodoo dolls in my likeness, however, do bear in mind that I really enjoyed The General. In fact, there were a lot of sequences that I loved. Unfortunately, the best stuff - on the train - is bookended by weaker material that makes this slim movie feel as if it's been unnecessarily padded out.

Based on a true story, detailed in a couple of books by William Pettinger, which were subsequently adapted into a screenplay by a couple of people before being written and directed by Buster Keaton and Clyde Bruckman, the basic story concerns Johnnie Gray (Keaton). Johnnie is in love with Annabelle Lee (Marion Mack), but his declaration of love comes just as war begins. Annabelle cannot love a man who won't fight for his county, so Johnnie duly heads off to enlist. Unfortunately, he's refused because of his vital role as a train engineer. One year later, without the love of his life, Johnnie is fired up into action when Union spies steal his locomotive, planning to use it as a way to ensure their victory. It's up to Johnnie to defeat numerous enemies, and perhaps even win the war.

As mentioned above, this movie has about 10-15 minutes at either end that just don't feel funny or energetic enough, BUT that may be down to the fact that the middle section (all of the action with Keaton on a train as he chases after his stolen locomotive) is just so damn good. There are so many moments of physical comedy gold that to pick out just one is nigh on impossible, but I'll personally nominate the scene in which Keaton tries to line up a spectacular cannon shot as one particular highlight.

Keaton is, of course, the star of the show, but it's also worth remembering just how much spectacle this movie puts on the screen. With the large cast of extras, the amount of destruction and those trains being onscreen for most of the runtime, this is a BIG film. In fact, one shot in the movie (that I won't spoil) remains the most expensive ever filmed in the silent movie era.

A great comedy, and a great tribute to the bravery of Pettinger, The General remains well worth a watch, and has maintained its reputation over the years with good reason. 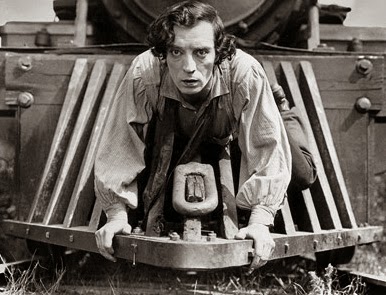