Writer-director John Michael McDonagh made a pretty good impression, to say the least, with his first feature film, The Guard. A film mixing character study with Irish charm with police thriller elements, it was rightfully held up by many as one of the best from its year of release. Well, come the end of 2014, I expect Calvary to be in any such list.


Teaming up once again with Brendan Gleeson, McDonagh this time mixes entertainment with a scathing condemnation of the Catholic Church and a commentary on the state of Ireland as it is today, and the people who took it to that position. Yet, for all of the anger and cynicism in the script, everything is also offset, and beautifully so, by a message of positivity and forgiveness.

Let me actually get to the plot. Gleeson plays Father James Lavelle, a priest who hears a man in confession say that he’s going to kill him. But he’ll give the priest about a week to get his affairs in order. Killing a bad priest wouldn’t make much of an impact, but killing a good priest, that’s something. Such is the reasoning of the killer. Does this prompt Father Lavelle to rush to the police or flee? No. Instead, he goes about his duties in much the same way as before, all the while trying to help members of his parish (including the person that he knows is due to kill him). Father Lavelle is a good man. That much is made clear from the very beginning of the movie. He’s also a deeply flawed man, having battled with the demon drink through the years, but events in his past have made him what he is today, and that becomes obvious when he receives a visit from his daughter, Fiona (Kelly Reilly).

While I'd like to praise the entire cast here in a way that shows just how great everyone is onscreen, this is Gleeson's movie. As with The Guard, he takes a main character and makes him riveting to watch, even when there seems to be nothing happening. The fact that he's once again given such great support - this time by the likes of Reilly, Chris O'Dowd, David Wilmot, Killian Scott, Aidan Gillen, Orla O'Rourke, M. Emmet Walsh, Dylan Moran, Isaach De Bankole and Domhnall Gleeson (and one or two I have missed out, apologies) - is just a testament to the ability of McDonagh, or whoever he employs, to put together the perfect cast for his work.

While McDonagh also does a very good job with the direction, his strength lies in his writing. If Calvary was JUST an angry rant, using such great actors and providing such great entertainment, then I would still be praising the movie and writing a positive review. But it's so much more than that, and the realisation of the journey that the film has just taken you on will perhaps leave you stunned and moved as the end credits rolled. I can't stop getting a lump in my throat when I think about the film now, and I'm writing this review a day after seeing it. I can't recall the last time a movie affected me so profoundly.

It's not actually a masterpiece, and it may prove to be a very divisive film (when the central message seems to angry and skewed), but for me it's so close to perfect that it's getting the highest rating possible. I am keen to rewatch it soon, I am keen to own it, and I am keen for other people to give it a chance. And for anyone who does go along to view Calvary and finds it somewhat underwhelming, all I ask is that you don't give up on it until the whole tale has unfolded. Then decide how you feel about it. 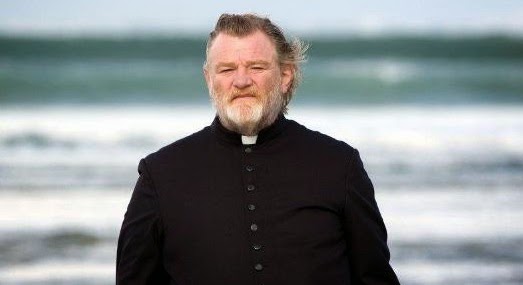 You can also buy my book.

As much as I love the rest of the world, I can't keep up with all of the different links in different territories, but trust me when I say that it should be there on your local Amazon.
Posted by Tylerandjack at 17:30