The first feature movie for the Broken Lizard comedy troupe, Puddle Cruiser has some laughs here and there, but it falls far short of the greatness that they would be delivering just around the corner (starting with the hilarious Super Troopers, and continuing with some other vehicles I have grown to love).

It's the university life for the Broken Lizard boys. Steve Lemme is the charming student named Felix Bean, a young man who finds himself in a casual relationship with a young woman (Suzanne, played by Kayren Butler). Things are complicated by the fact that Suzanne is seeing someone else. They're further complicated by the fact that she's legally representing two friends of Felix, Grogan (Kevin Heffernan) and Matt (Paul Soter), as they try to clear their names of a crime that Felix also had a hand in. Meanwhile, Zach (Jay Chandrasekhar) has been given a telephone number by a girl, but it's missing a digit, which leaves him trying out a variety of combinations. And then there's Freaky Reaky (Erik Stolhanske), who just keeps himself amused by being mellow and freaky.

There ARE funny moments in Puddle Cruiser, but they're relatively few and far between. The lunacy of the campus trial, when Heffernan and Soter get to cut loose, is fantastic fun, but a lot of the material looking at the relationship between Lemme and Butler is a bit flat. Fans of the inspired lunacy that Broken Lizard would bring to their next few movies will most probably end up disappointed when giving this one a go.

The cast all do their best, however, and try to compensate for the material with energy and enthusiasm. Heffernan, Soter and Stolhanske have all the best moments, but Lemme and Chandrasekhar have at least a couple of opportunities to provide some amusement, with the former doing a perfectly fine job as the nominal leading man.

Written by the whole gang, it's Chandrasekhar who directs the action, cutting his teeth here before developing his filmography in a fine selection of future projects, both with Broken Lizard and without. He keeps things simple here, understandably, but does a competent enough job.

I was going to say that this was one for completists only, but I guess there are people who will find it much more enjoyable than I did. So I'll just say . . . . . . . . . approach with caution. 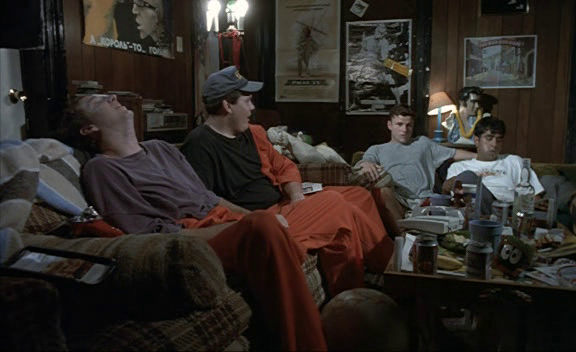 As much as I love the rest of the world, I can't keep up with all of the different links in different territories, but trust me when I say that it should be there on your local Amazon.
Posted by Tylerandjack at 10:30