I have to begin this review by confessing that, somehow, up until now I had never seen a Laurel & Hardy movie. Not a one. Oh, I'd seen some clips and may have seen one or two of their shorts in my youth, though I can't recall, but this was going to be a first for me.

Laurel & Hardy have enough fans. They're titans in the field of comedy, and don't need me defending or criticising them, so please bear that in mind when I proffer up my unworthy opinion after the following brief plot summary.

It's quite a simple tale. Stan and Ollie have taken a solemn oath to join their brothers from the Sons Of The Desert lodge at a convention in Chicago. Unfortunately, they didn't run it past their wives first of all. Stan is very upset, whereas Ollie thinks it will be easy. They are the men of their respective households, after all, so it shouldn't be a problem. Funnily enough, it's a problem, which leaves both men having to work together to come up with some excuse that will allow them to attend the convention without their wives ever finding out. Knowing Stan and Ollie, that can only end badly.

Recommended to me, along with a number of other titles, by fans of the duo, perhaps Sons Of The Desert wasn't the best movie for me to start with. It's good, don't think that I didn't enjoy it for the entire runtime, but I was somehow expecting something more. The slapstick felt, to me, forced and overdone. How many times can Stan forget how to open a door, for example, or how much water can he spill by constantly moving a tub full of the stuff into the wrong position? Having said that, there were plenty of solid laughs coming from both the dialogue and the entire situation as it unfolded throughout the film. The premise is, of course, a classic one that would be used, or so it seemed, by every sitcom throughout the fifties, sixties and seventies.

William Seiter is the director, and keeps things nice and simple for most of the movie. Just lock the camera down and watch Stan and Ollie work with one another. Simple. The story by Frank Craven has about half a dozen uncredited helping hands listed on IMDb, but I guess that many developments and set-pieces were shaped by the stars, allowing them to play to their strengths.

Laurel & Hardy are almost beyond criticism, and it seems redundant to heap more praise on them at this point, so I'll just say that Charley Chase was also fun in a small role, while Mae Busch and Dorothy Christy were both simply fantastic as the wives of the hapless leads. Christy is as sweet to Stan as he deserves. Busch, on the other hand, doesn't hold back when dealing out any punishment to Ollie.

A film worth seeing, and most Laurel & Hardy fans will have already seen it, but if you're new to the duo, as I am, then it may be one to push back, just until you've eased into their filmography with one or two other adventures. 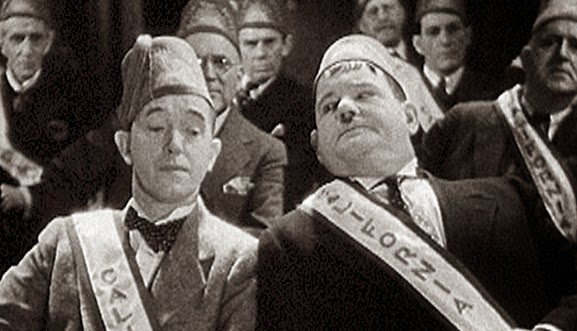