L.A. Confidential is, to me, a perfect film. Sometimes I just want to start off with a statement that clarifies all the nonsense I'll be about to write. In this case, I'd like to beg your forgiveness in advance for a shameless torrent of effusive praise. I really can't think of anything bad to say about this, a movie that I class as a modern classic and easily the best neo-noir of the past twenty years.

Dense and rich, this is a film that benefits from superior source material (by James Ellroy). It's adapted into gripping cinema by Brian Helgeland and Curtis Hanson, with the latter also taking on the directorial duties. It's not exactly hard to follow, as hard as that may be to believe, but it's a film that assumes that viewers will give it their full attention. It certainly deserves it.

Now, let me try to cover the plot and main characters without taking up too much space here. Guy Pearce plays Ed Exley, a young policeman who is ambitious, but also unwilling to use any eans necessary when it comes to catching the baddies. Russell Crowe is Bud White, a brutal policeman who doesn't mind bending/breaking the rules. The two men don't get along. When a local crime boss is jailed, Los Angeles suddenly looks like a very appealing pitch to a number of criminals who want to move in and set themselves up. This keeps the police department, led by Captain Dudley Smith (James Cromwell), very busy. But when a shooting occurs that results in the death of a fellow officer, and when the end result starts to throw up some minor details that hint at a much bigger problem, Exley and White realise that they may need to work together to get to the bottom of things.

There are other characters who play quite an important part in the proceedings described above, with the main ones worth mentioning being a newspaper reporter (Sid Hudgens, played by Danny DeVito), a beautiful woman named Lynn Bracken (Kim Basinger), a cop who advises on a top TV show and loves the celebrity life as much as his job (Jack Vincennes, played by Kevin Spacey), and a man who makes a living through not entirely legal means (Pierce Patchett, played by David Strathairn).

Okay, I probably took up too much space, but I'm still happy with that summary. L.A. Confidential is a film brimming over with detail and character nuance in every scene. Although it runs at just over two hours in length, there isn't a scene that feels superfluous to requirements. Some viewers may not appreciate everything on the first viewing, but return to it and you'll notice new touches of brilliance. Little touches that will ensure you return to it again and again.

The script is pretty perfect, as far as I'm concerned, with the use of narration by reporter Sid Hudgens a great way to both set up the context of events, and also skim through one or two montage moments. The direction is smooth and precise. There's a coolness in the setting and characters, but there's also a beating heart within every main character, something that becomes more apparent as the movie progresses and events allow them to show their true nature and intent.

Pearce and Crowe may have slight wobbles here and there when it comes to the accents, but they overcome that minor hiccup by delivering performances that I'd tentatively call star-making (despite both having already done some great work before this). Cromwell, Spacey,DeVito and Strathairn are also excellent, and Basinger gives one of her best performances (one that resulted in her winning an Academy Award). Ron Rifkin, Matt McCoy, Graham Beckel, Simon Baker, and everyone else onscreen for more than a few seconds, all do equally great work. In fact, even people onscreen for a few seconds seem fine. Admittedly, they don't have much time to screw things up, so that's probably just a given in most movie productions. My point is that everyone feels perfect in every role they're given.

The soundtrack from Jerry Goldsmith moves nicely in between some classic tracks from the era, the clothes and makeup are all as gorgeous as they should be, and there are plenty of enjoyable twists and turns that never feel forced while the whole tale unfolds.

Not just one to watch, this is one to own, cherish and rewatch on many occasions. 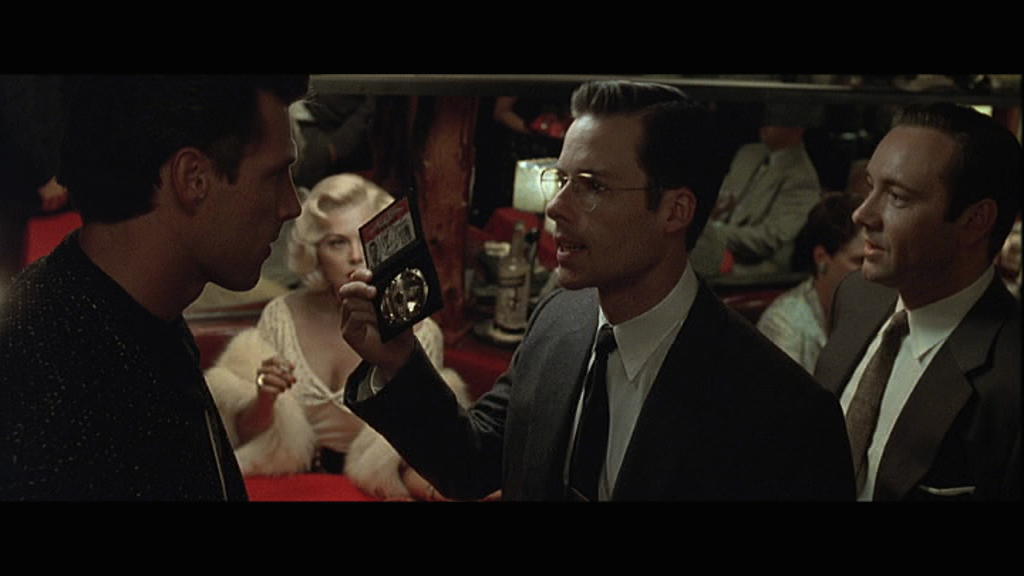