Is it sheer coincidence that exactly twenty years ago Brad Pitt played a man who commanded an army of "space monkeys"and now, in Ad Astra, he has a moment in which he actually encounters a space monkey? It probably is, but I like to think not. Because while Fight Club (which featured Pitt as Tyler Durden and his space monkeys) delved into the recesses of a dangerous and destructive mind, Ad Astra takes viewers on a journey that shows part of what it takes to keep exploring the further outreaches of our universe. Captain Marvel may have been sold with the tagline "Higher. Further. Faster." but the same applies here.

Pitt is an astronaut named Roy McBride, and a damn fine one at that. Nothing really phases him, as we hear near the start of the movie when those appraising his health comment on how low his heart rate remains, even in more stressful times. He's divorced, explaining this to others with a resigned acknowledgement that his job is not an easy one on anyone who would be waiting at home for him, and has no strong connection to anyone, so it would seem, which makes him an ideal candidate for a mission that involves him travelling to try and contact his father (Tommy Lee Jones), an astronaut assumed dead many years ago when no further communication was received from him.

Starting with a huge power surge, the main event that serves as the motivator for the main mission, Ad Astra then settles in to what it ultimately is. It's the thoughts of a man pushing himself, both physically and mentally, in order to discover what else lies out there in our universe, be that answers we have been seeking for centuries or nothing. There's a possibility that the only thing beyond the stars is more space. A void. Which would then serve as a reminder that there are many journeys we can all make on our home planet, within our own minds and bodies.

Director James Gray, who also co-wrote the script with Ethan Gross, wants to deliberately slow things down. Space travel, especially over the kind of distances shown here, is often imagined as sleek and quick and easy. But it's really not. It's a long time spent waiting, often alone with your thoughts and the vastness of space around you. Moments of crisis may punctuate the relative monotony, but even those aren't film-friendly crescendos. They are emergencies only until things are stabilised, and then it's business as usual. The film reflects this, locking viewers in with Pitt's character, he is still for many sections of the film and we hear his thoughts in voiceover narration, but it also realises the environments with some top-notch CGI.

Although you get decent supporting turns from Ruth Negga, Donald Sutherland, and Jones, of course, this film rests very much on the shoulders of Pitt and, in much the same way he has been stealthily and steadily improving with almost every movie he's done in his career, it's a superb central performance. The film may still be too slow and ponderous for some, and perhaps Gray realised that such a different look at the stars would need a major star at the centre of everything. What better surface to show reflected starlight on than a different kind of starlight.

Two main sequences disappoint, one at the halfway mark and some beats during the third act, but, overall, Ad Astra is a welcome slice of intelligent sci-fi that shows how much outer space can relate to our deepest inner space.

You will be able to buy the movie here.
And American sci-fi fans may enjoy this book. 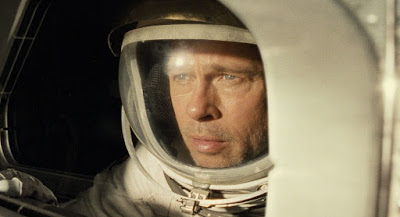