The Chronicles Of Narnia: Prince Caspian (2008)

A cinematic return to Narnia, with many of the same people both in front of and behind the cameras, Prince Caspian both benefits and suffers from the fact that it's not just the first film all over again. It's good to visit Narnia for a tale that isn't as familiar (to those who haven't read the books anyway), but it's also not so good when you realise that the tale being told this time around, well, it's just not quite as enjoyable.

Peter (William Moseley), Susan (Anna Popplewell), Edmund (Skandar Keynes), and Lucy (Georgie Henley) are once again transported to Narnia, this time called by a magical horn, unbeknownst to them. Over a thousand years have passed since they were last in that world, although it has only been about a year in their own time, and much has changed. There has been division and war, and there's currently a young man (the titular prince) who may improve the situation, if he is kept alive long enough to ascend to the throne.

As well as the Pevensie siblings returning to our screens, we also get some more screentime for Aslan (voiced by Liam Neeson again) and the White Witch (Tilda Swinton). But it's the new characters who make the strongest impressions. Peter Dinklage and Warwick Davis are two Narnian dwarves, with the former getting almost as much screentime as any of the other leads, Eddie Izzard is the voice of a swashbuckling mouse named Reepicheep, and Ken Stott voices a knowledgeable badger named Trufflehunter.

Everyone onscreen does well enough, with most of the younger cast members slightly improved compared to their previous work. Ben Barnes is Prince Caspian, and manages to portray his character as a good man without ever becoming annoying pious, and his main enemies are played well by Sergio Castellitto, playing his character of King Miraz in over-the-top pure villain mode, and Pierfrancesco Favino (who plays a General to the King, torn between duty and considering how to play out events in a way that will allow him an escape).

Director Andrew Adamson does well enough at the helm, once again, but his best work is done in the script department, once again alongside Stephen McFeely and Christopher Markus. This feels like a more mature work than The Lion, The Witch And The Wardrobe, yet it is all put together in a nicely uncomplicated, but also unpatronising, way. Unfortunately, that doesn't mean it is as consistently entertaining as it could be. From the very opening scenes through to the finale, there's always the sense that viewers should be caring more about the events unfolding onscreen. A little bit of restructuring would have helped to improve this, perhaps starting with the Pevensies being whisked back to Narnia and letting viewers discover the changes and dangers of the world that was once very familiar to them at the same time as the main characters.

And, as a recurring way to end these Narnia-focused reviews, can we all just agree that Aslan is a Superlion who could always help everyone a lot sooner than he does? Bloody poser, just waiting for his big moment in the finale to save the day and then pretend it was a close call.*

*Yes, I plan on also ending my next review with this statement.

You can buy the boxset here.
Americans can get the movies here. 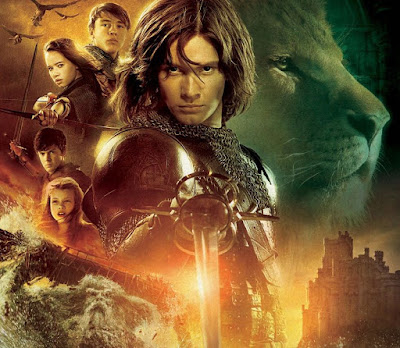