Wes Craven gave horror fans two movies in 1984. One was the slasher classic, the birth of a new icon, A Nightmare On Elm Street. The other one was this, a very different kind of slasher, and a film not considered one of his best (to put it mildly).

A group of friends travel across some desert land as they try to get themselves to a bike race. Having got their timing wrong, it soon becomes clear that they need to take a shortcut if they want to get there on time. And that is how they end up in territory being overseen by members of the cannibal family last seen in The Hills Have Eyes. You'd think that the area might be a bit safer now, with most of the family seemingly dealt with by the end of the first movie, but that's not the case. There is still a very real threat there, thanks to Pluto (Michael Berryman) and a character known as The Reaper (John Bloom).

There are two big mistakes made here (not including the infamous moment in which we see the flashback of a dog). The first is deciding to connect this to the first one in ways that were unnecessary. Craven obviously wanted to say something interesting about those who survive such a traumatic experience, but it's a wasted bit of commentary, with the surviving character of Bobby (Robert Houston) simply used as a lead in to the events, and Rachel (Janus Blythe) too easily "tamed" after first being shown as Ruby in the original movie. The second big mistake is taking too long to set everything up in the first half of the movie. This is not a long film, it clocks in under the 90-minute mark, but it feels longer, mainly thanks to the uninspired mix of thin characterisations and flashbacks that make up the opening act.

Berryman and Bloom are both good in their roles, although Berryman isn't as good here as he was the first time around (made slightly less threatening and more pathetic this time), and they certainly fare better than the crowd of young folk who we're supposed to be rooting for, nominally led by Cass (a blind woman played by Tamara Stafford) and Roy (Kevin Spirtas). John Laughlin, Willard E. Pugh, Peter Frechette, Colleen Riley, and Penny Johnson Jerald are given far too little to work with, aside from one or two decent death scenes, and even Blythe suffers at the hands of a poor script that sets her character up to be more interesting than it is allowed to be.

Having said that, the film is not without some charm for fans of simple slasher fare. The larger cast means that you just know there are due to be at least a couple of extra death scenes, there's a score from Harry Manfredini that works well (even if, or because, it feels like it could have been lifted from any Friday The 13th movie), and Craven tries to put all of the pieces in place for a satisfying finale. He doesn't succeed . . . but at least he tries.

Far from essential viewing, this now sits as one of those many films dismissed by horror genre fans that isn't quite as bad as its reputation might suggest, but it's also not one that deserves to be reappraised as any kind of misunderstood classic. It's a weak sequel, mainly due to a weak script from Craven (and the fact that he was only given enough of a budget to film about two thirds of what he actually wanted to film), but those after a bit of dumb fun could do a lot worse.

You can buy the movie in a super-duper edition here. 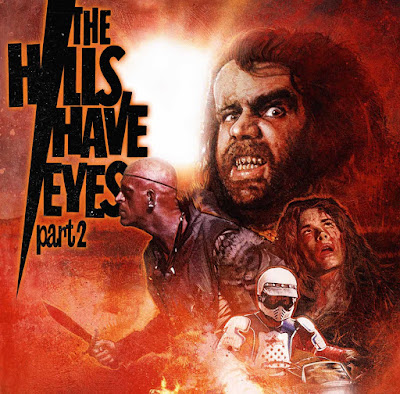