One of those little, effective movies that you often catch at film festivals, just before they disappear and become almost impossible to track down, Our House is an engrossing drama that feels very much like it's one step away from being a supernatural horror movie. In fact, I'm still not entirely convinced that it isn't.

Seri (Nodoka Kawanishi) lives with her mother (Yukiko Yasuno). Her father died, something she is struggling to move on from, and things become more difficult as she learns that her mother is dating a new man. Toko (Mei Fujiwara) lives alone, but only until she finds Sana (Mariwo Ohsawa), a woman who is troubled by a lack of memory. This quartet of people live in the same house, with neither couple realising that the other couple exists. Is there an explanation for this, be it time trickery or some dimensional overlap, and does it even matter?

I struggled to even piece together the cast list for this film, taking my information from a variety of sources (IMDb, MUBI, various pieces already written about the movie), so I apologise now for anything that is incorrect. Just about the only thing I am sure of is that this was directed by Yui Kiyohara, who also co-wrote the screenplay with Noriko Katô. It is the debut feature of Kiyohara, created as a graduation project (this nugget of information was provided by MUBI), and marks her out as someone definitely worth keeping an eye on.

I'll mention the four main performances, before I forget about them. Kawanishi and Yasuno both do very well alongside one another, giving realistic and grounded portrayals of a child and parent who love one another but are temporarily at odds. Fujiwara and Ohsawa get more interesting material to play around with, more moments that are often surreal and strange, and both do equally well in their roles, showing themselves to be individuals battling with whatever is hidden deep within themselves, another aspect never fully revealed.

But this is a film about atmosphere, and about time and place. It's a film in which lives interconnect without anyone really realising that, all shown in an interestingly overt way to sum up the various interactions we have that make us what we are. Toko may be the lynchpin, seeming to spend most of her time away from so many other people and happily alone. Compared to every other character in the film, she feels like the one person who doesn't need anything else in her life . . . until she does, which she struggles to deal with during the third act. It's almost as if Kiyohara and Katô are telling people that it is absolutely impossible to ignore all of the experiences that made you who you are today. Blocking them out will only lead to a painful reawakening further down the line.

Or maybe they're not saying that at all. Maybe this is something else entirely. Maybe it's just an exercise in atmosphere and subtle acting. It also works in those simpler terms. I didn't love Our House, I would have liked a little bit more to it (although I am not one of those people who needs every question answered in my movies), but it hooked me in quite early on, and kept me there for the entire, brief, runtime. 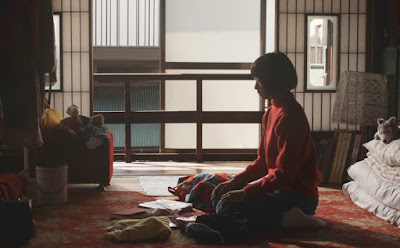