It's worth noting that the Prime Time choices for the past couple of weeks have been all thanks to Rebecca Booth and Mark Cain, who are involved with the United Nations Of Horror podcast (both together), The Good The Bad & The Odd podcast (mainly Mark, although Rebecca has contributed), and House Of Leaves publishing (Rebecca), as well as numerous other projects. I listen to a wide variety of podcasts, and read many great writers (as well as *ahem* doing my own stuff), but felt that these two recent blog posts were so directly drawn from comments made by Rebecca and Mark that the least I could do was mention them.

A tale of a very dysfunctional family unit, Mumsy, Nanny, Sonny & Girly focuses on those four characters, the games they play, and the guests that they keep in their home. Their new friend is a man (Michael Bryant) who soon starts to learn how best to play the games he is forced to partake in, and also starts to figure out how he can possibly play individuals off one another while he keeps himself safe from harm.

Directed by British stalwart Freddie Francis (who gave us so many treats scattered throughout his filmography), and written by Brian Comport (who only wrote less than half a dozen features, but gets kudos for this alone), what you get here is a wonderfully British slice of murderous madness. Think of it as The Country Estate Has Eyes and you're not too far away from the vibe of the whole thing. It's interesting that so many of these movies popped up in British cinema throughout the late '60s and all throughout the next decade, but most of them are either forgotten or dismissed. That's a shame, because they're all a natural progression from the kitchen sink dramas that still get plenty of praise heaped upon them to this day.

While this was based on a play by Maisie Mosco, it somehow feels both completely unique and yet also an inevitable addition to a range of films that include, but are not limited to, the likes of Straight On Till Morning, Demons Of The Mind, any number of Pete Walker films, and even the sci-fi horror weirdness of films like Prey and X-tro. There are many others I could bring up here, films that either mix the scares with the apparently quintessentially British way of being very well-mannered about every inconvenience, films that give us Brits some homegrown families that slay together while staying together, but I'm not attempting to completely diverge from this main review. Suffice to say, it's worth digging into the subject.

Getting back to this, the four main characters are played by, in titular order, Ursula Howells, Pat Heywood, Howard Trevor, and Vanessa Howard. And I've already mentioned Bryant as the new playmate for them. All of them do very well in their roles, with each member of the quartet feeling equally cheery and dangerous at all times, and Bryant suitably bemused before his sense of self-preservation kicks in and he starts catching on to every main cue. Vanessa Howard arguably steals the scenes, thanks to Girly being the most interesting character to watch, in the way her mind works and her allegiances may be liable to change, but everyone has fun in a film that is paced perfectly, throws up plenty of uneasy psychosexual content, and laces most of the runtime with a healthy dose of very black humour.

It's obviously not going to be for everyone, and some may find it too laughable while watching the performances of a young man and woman acting younger than their years, but I'll still recommend it to those who have enjoyed any of those other titles I just mentioned. It's a heady brew, and an entertaining one, and deserves to be saved from the relative obscurity it has been languishing in for many years.

There are ridiculously overpriced discs available online, we can simply live in hope that this is the kind of title picked up by the boutique labels I enjoy giving my money to. 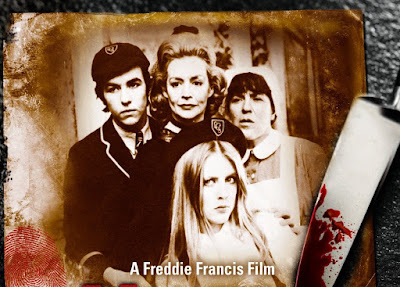