The third film in what is, to me, one of the best set of found footage movies around, Hell House LLC III: Lake Of Fire may also prove to be the best point at which to end the series (although I am sure that others think that should have happened after the first film).

Once again written and directed by Stephen Cognetti, the Abaddon Hotel is open for business yet again, this time due to be the setting of a theatrical riff on Faust, put on by the rich and successful Russell Wynn (Gabriel Chytry). The preparation for the experience, which will take audiences on a journey through the hotel, is recorded by a local reporter, Vanessa Shepherd (Elizabeth Vermilyea) and her small team. And it's not long until strange things begin happening.

Not quite as good as the second film, but still a step ahead of the first, "Lake Of Fire" works best when it's being nothing more than a series of brilliant, and creepy, scare moments. I can absolutely understand why people may prefer the slightly more subtle approach of the first film, but things have improved for me ever since that first story was out of the way, allowing Cognetti to push onwards and upwards with tales of the hotel and recurring nightmare imagery.

Okay, this is not going to win any awards for the writing or the acting, or anything else really. I didn't really enjoy the performance from Chytry, who doesn't bring enough to the role to make up for the fact that the script gives him almost no depth at all, but Vermilyea at least did better, and was someone worth rooting for. The only other person to mention is Sam Kazzi, as a producer trying to hide away the worst things that happen on the way to opening night. Kazzi does alright, and is at least more memorable than some of the others onscreen. This is a film that adds more characters to the main storyline without giving them anything to do beyond being targeted in main scare scenes.

Here's the thing though, I am not too bothered by that. When the scares are as well done as they are here (e.g. an initial chilling encounter with some clown figures that provided plenty of chills in the last two movies) then it helps to forgive all manner of failings.

Cognetti definitely tries, but he can't do enough to flesh out the cast while setting up all of the plot points that he wants in place by the grand finale, all in between the spine-chilling set-pieces. Ideally, a slightly longer runtime could have been used effectively to spend more time with different characters, although he's also constrained by the "found footage" format. His biggest mis-step comes towards the end of the whole thing, where he decides to make a few decisions that a) feel out of character for this series, and b) feel far too contrived as he attempts to tie everything up in a way that connects all three movies and provides an all-too-neat ending to the whole tale.

Ending aside, which is still good enough, if not what I personally wanted, this is an excellent little horror movie, and I hope they leave the Hell House movies alone now that we have a damn fine trilogy. I'll definitely be keen to see what Cognetti gets up to next.

Hell House LLC III: Lake Of Fire is currently streaming on Shudder, and that new Creepshow series just launched, AND they have Tigers Are Not Afraid, so now is a good time to bag that free trial. 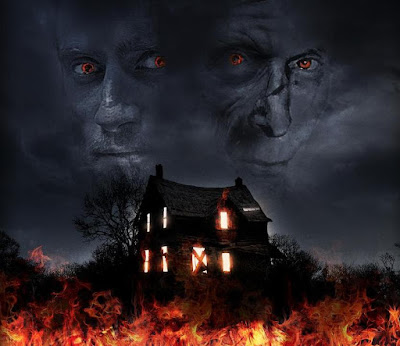