There are two horror films, that I know of, that came out in 2018 with the word fest making up part of the title. This is one, and the other is Blood Fest. Both of them involve a killer causing havoc at a major fan event. Both of them play around with slasher movie tropes. And both of them have a sense of playfulness about them. But Blood Fest is the more playful of the two. It's also better.

Not that this is a bad film. It's fine, for what it is. It's just a shame that what it IS is a pale Scream-wannabe that feels at least a decade too late. They even seem to hedge their bets by casting Bex Taylor-Klaus (who played Audrey Jensen in the abysmal Scream: The TV Series), which backfires due to the fact it will remind viewers that Scream: The TV Series exists.

But let's cover the basics. Amy Forsyth is Natalie, a young woman who ends up going along to a horror-filled amusement park with her friend, Brooke (Reign Edwards), another young woman (Taylor, played by Taylor-Klaus), and three young men. After some time spent enjoying the thrills of the park, the group soon realise that they are being followed by someone with an all-too-keen interest in them. Unfortunately, it's impossible to keep track of this killer, because he looks like so many of the masked workers in the park, and he can get away with murdering people in plain sight, because everyone thinks it is fake anyway.

There's not too much to complain about here, not really. Especially if you're the kind of horror fan who spends most weeks wading through some dross to find the gems (and that is really what most horror fans do, if we're being completely honest).

Gregory Plotkin directs with a decent eye, and this is a big step up from his first feature, Paranormal Activity: The Ghost Dimension. The set ups for each big moment of tension may be fairly predictable, but Plotkin still does his best by them, with the horror park obviously fertile ground for such sequences.

This is also a big step up for Seth M. Sherwood, co-writer of the script with Blair Butler. Sherwood previously gave us the poor franchise entry that was Leatherface (2017), but he does just enough here to allow me to forgive him and move on. It's just a shame that the script doesn't make even more of the setting. I can't put my finger on it, and it may sound silly when you consider that 80% of the movie takes place in the horror park, but it always seems to be missing a number of opportunities to really crank things up with a tension only felt by the leads while everyone else around them remains oblivious. It comes closest to doing this well in a fantastic third act moment that has Taylor-Klaus jokingly offering herself up as someone guilty of crimes that warrant death by guillotine.

Most of the cast members are pretty interchangeable, with the exception of Tony Todd in a nice little cameo, but Forsyth is fine in her role, and Taylor-Klaus gets to constantly energise the group with an infectious enthusiasm for the whole experience. Nobody stinks up the screen, which is a big plus, even if there isn't anyone truly standing out either.

Although I started this review by mentioning that Blood Fest is the better film, there's not much in it. This is a decent, slick, slasher movie that has a number of great visuals throughout to make up for the disappointing lack of deadly set-pieces. 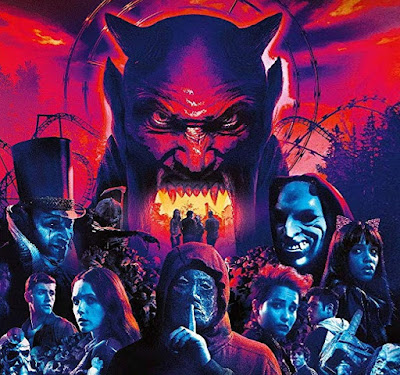