Director Jonathan Levine has worked with Seth Rogen on a couple of other movies (both 50/50 and The Night Before), and the two seem to work well together. So it's no surprise that adding the wonderful Charlize Theron to the mix, and working from a script by Dan Sterling and Liz Hannah that effectively flips The American President around, and adds some obligatory drug gags, makes for a film that, while no classic, is at least amusing and enjoyable throughout.

Rogen plays Fred Flarsky, a journalist with principles, doing his best to stand by his work in a world that is making it harder and harder for individuals to maintain their integrity. In fact, he walks out of his job when the company he works for is taken over by a manipulative media mogul named Parker Wembley (an unrecognisable Andy Serkis). This leads to him being at a party with a friend (Lance, played by O'Shea Jackson Jr) and reuniting with Charlotte (Theron), a woman he last saw when he was a teen, and someone he was in love with even before she turned into her final Theron form. Charlotte is about to throw her hat in the ring as a presidential candidate, and she figures that Fred may actually help her with his writing ability. But more develops between them.

Here's the thing about Long Shot. Much like most other Seth Rogen movies, this will be more or less enjoyable depending on how you can handle Rogen. I tend to enjoy him onscreen but there's no denying that he's very often the same "lovable stoner" character in almost all of his films. You get the occasional statement about drugs helping people be relaxed and happier, you get him laughing his recognisable laugh, and you get him being wide-eyed and incredulous as events unfold around him that leave viewers in the same way. There's more to enjoy here, but it will still depend on whether or not you can put up with Rogen in the lead role.

Although the heart of the film is a romantic comedy, Sterling and Hannah do a good job of mixing in a strong strand about the slippery slope of compromising your beliefs, and the realities of getting results while you're trying to build support for something that may seem fresh and radical to some. The film isn't exactly bogged down by the politics, really just trying to milk the whole scenario for more laughs, but it does enough throughout to ground the laughs, certainly never feeling as ridiculous or unbelievable as it could.

A lot of that is also down to Theron. I don't know about you, but I would vote for her. She's smart, witty, passionate about her chosen main cause, and also Charlize Theron. Rogen being paired up with her seems very unlikely, but it works better than it should because of him finding it as hard to believe as everyone watching the film. Bob Odenkirk is a lot of fun as the current POTUS, who landed his position after years of TV work and now wants to move on to a career in movies, June Diane Raphael and Ravi Patel are both a lot of fun as advisers to Theron's character, and Jackson Jr does just fine as the supportive friend. Another highlight is Alexander Skarsgård, playing a handsome Canadian Prime Minister (or, I guess, just a Canadian Prime Minister, the handsome part comes from him being Alexander Skarsgård) who is always looking to enjoy the company of Theron's character, and their chemistry together seems to often provide a small boost in their approval ratings.

Surprisingly sweet at times, Long Shot is a well-made rom-com that hits all of the expected notes throughout, yet also feels a bit different, thanks to the raunchier and more outlandish moments (Theron being unexpectedly called into an emergency military negotiation is a VERY funny sequence). Levine works well with Rogen, as well as everyone else involved, and this is an amusing diversion, managing to somehow avoid overstaying its welcome, despite clocking in at about two hours. It also has the funniest . . . orgasm fluid . . . gag I have seen since There's Something About Mary. 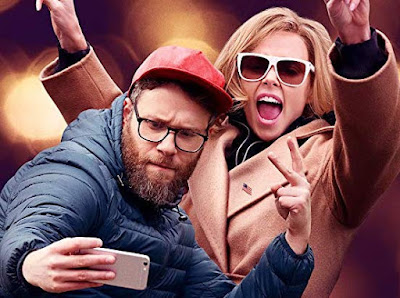