Peter Sullivan is a name you may recognise if, like me, you enjoyed watching all of the snow-filled TV movies we have filling up the schedules every Christmas time. He's done at least a dozen of them, which will come as no surprise to you once you have seen this unthrilling thriller that is now presented by Netflix.

On the one hand, I try my best to avoid spoilers whenever I review movies. I really do. I am not one of those people who thinks "the film is 50 years old anyway so it doesn't matter". And I certainly don't agree with the idea of "I thought it was crap anyway so here's how it ends", which I think is a particularly shitty way to express your negative view of something. Just because you hated something doesn't mean that everyone else will agree with you. On the other hand, and this is not an exaggeration, it's pretty much impossible to spoil Secret Obsession. If you saw the trailer then you know how it ends. If you didn't see the trailer, don't worry, everything is completely obvious within the first few minutes.

Brenda Song plays Jennifer Williams, a young woman who starts the movie looking quite afraid until she's struck by a car, ending up in hospital with some horrible injuries and memory loss. Her loving husband, Russell (Mike Vogel), wants to get her home as soon as he can, just to make sure she can rest and recuperate in peace, and not at all because he obviously had something to do with the opening sequence. Jennifer rests up, occasionally thinking about everything she notices around her in a way that gets her spidey-sense tingling. Russell, meanwhile, acts suspiciously, then acts more suspiciously, and finally just reveals the dark core that viewers have known was there since the very beginning, all in time for a grand finale that sees the two leads joined by dogged Detective Frank Page (Dennis Haysbert).

There's something mesmerising about just how amazingly straightforward Secret Obsession is. There's no way that anyone involved could have thought they were making a real thriller. I'll admit that I wondered at what point this was going to change from the glossy nonsense I was enjoying to the twisted nastiness we got in The Perfection, but I didn't enjoy the movie any less when I realised that it was going to provide absolutely no surprises. As strange as it may seem, this proves to be quite the treat because of how resolutely it hits all of the expected beats without any of the tension, or twists, you might expect from it.

I still have to say that everyone does a decent job here, because they seem to do exactly what they're aiming to do. Sullivan directs everything with a safe, made-for-TV, feel that only ever comes close to pushing the boundaries during one moment (Russell cradling Jennifer's injured foot), the script, co-written by Sullivan and Kraig Wenman, is along the lines of a plot you would have enjoyed during the heady days of Sunset Beach, and the performances are absolutely in line with the material. Song spends most of her scenes either looking vulnerable or looking for a way to escape, or both, Vogel LOOKS like a charming psychopath throughout, and Haysbert does the suspicious and determined detective act well without going too over the top.

This is awful, in many ways. It's also kind of wonderful. It's the movie equivalent of a fast food treat. Ultimately bad for you, full of crap, designed to be sold to as many people as possible, and yet it's enjoyable enough for the ten minutes you spend eating it, even if you know you will crave something proper to eat within a few hours. Watch this, enjoy it, and then seek out something better to help get rid of the aftertaste. 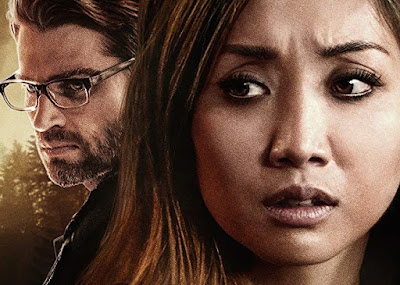