Netflix And Chill: The Strangers: Prey At Night (2018)

A sequel that nobody was really crying out for, released a decade after the original movie, I have to say that my hopes weren't high for The Strangers: Prey At Night. But I'd heard some people say they loved it, which was a plus, and I knew it was directed by Johannes Roberts (another plus, check out his filmography . . . he's like the modern Renny Harlin of genre fare).

And I ended up enjoying it, in a very different way from my enjoyment of the first film.

Although it starts with the usual nonsense about it being based on true events (almost every movie could be sold that way, considering how little you need to actually link things to reality), The Strangers: Prey At Night quickly sets itself up as something out to entertain, rather than completely unnerve and scare you. Not that it doesn't have unnerving moments. They're just interspersed between scenes that focus on murderous set-pieces, often accompanied by a fine selection of '80s tunes.

A family is heading off on a long journey, and they're due to arrive very late at a trailer park. There's the usual dollop of family tension, this time caused by a strain on the finances as the parents plan to send their daughter to a private boarding school, but that is quickly pushed aside when they start to realise that there's something amiss at their lodgings for the night, especially when a young girl comes to the door twice to ask for someone who isn't there.

Co-written by Bryan Bertino, who directed and wrote the first film, and Ben Ketai, this is a film that feels very much like someone cutting loose and having fun after having to show some restraint the first time around. There are some more kills, a more interesting environment for the characters to inhabit, and more moments that feel enjoyably cinematic.

Roberts directs with a keen eye, with both the script and the visuals allowing for some nice nods to a multitude of other movies (from slasher classics to the thought-provoking work of Haneke), and he maintains a perfect pace as he drags viewers through an 85-minute thrill ride that gets going quickly enough and doesn't really slow down until it's all over.

Cast-wise, the main family unit is made up of Christina Hendricks, Martin Henderson, Bailee Madison, and Lewis Pullman. Hendricks and Henderson are both solid as the parents, but it's Madison and Pullman who get to shine more as the kids/young adults. As much as I have enjoyed seeing Madison in the many TV movies she has appeared in over the past few years, I hope to see her in more films that don't feel planned around ad breaks. She's very good here, as is Pullman (who also gave a great turn last year in Bad Times At The El Royale), and both play well off one another as siblings who believably wind one another up until they are threatened, at which point they pull together to show their true united front.

All the more refreshing because it isn't being meta, or feeling the need to add a load of laughs in between the bloodshed, The Strangers: Prey At Night is a very pleasant surprise indeed. I'd even say that it edges just ahead of the first film, and I recommend it to all slasher movie fans. 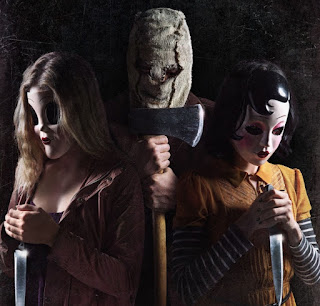