There's a lot to like about The Curse Of La Llorona, on the surface. I am going to start with that, just in case I get distracted and give the impression that I hated it. I didn't. Hell, it gets bonus points straight away for giving a lead role to Linda Cardellini. So it's just a shame that so many moments that could have worked well just fall surprisingly flat, with all concerned seemingly happier to turn what could have been an impressively fright-filled bit of mainstream horror into something a lot more tame, and sillier, than it needed to be.

The main premise is simple. There's an evil spirit, La Llorona, that frightens and takes away children, once they come under her gaze. Cardellini plays Anna Tate-Garcia, a woman employed in the social service sector, first seen being asked to work on a case involving a fraught mother (Patricia, played by Patricia Velasquez) and two young boys. More importantly, Anna has her own two children, Chris (Roman Christou) and Samantha (Jaynee-Lynne Kinchen). It's only a matter of time until La Llorona catches sight of those two, giving her two new potential victims while Anna tries to figure out just what is going on, and how she can put an end to it.

Cardellini does well with her complex role of "strong, frightened mother", the kids do well while being terrorised and terrified, and Raymond Cruz is the other main cast member, playing Rafael Olvera, a priest on the edge who doesn't necessarily play by the rules but gets things done, dammit. Velasquez is fine, Marisol Ramirez is given a makeover to play La Llorona, and Tony Amendola appears to connect events to Annabelle. Because, yes, it is tangentially linked to that movie, which gives it a head start at the box office, and in the home entertainment market, thanks to the value of the IP, always fairly visible on all of the marketing materials.

Considering this is his first feature, Michael Chaves does a very good job in the director's chair, even if he wraps every main scare sequence in low lighting and murkiness. There are some nice visual touches throughout, but it's hard to remember them once the end credits have rolled after you realise that you spent most of the film squinting at one patch of darkness after another. The jump scares are reasonably effective, but only until you realise that it's the same couple of tricks being re-used every few minutes (either something glimpsed in one part of the frame to then be seen a lot closer to a main character in the next moment or a feigned bit of misdirection while La Llorona gets within reach of her prey), and the third act subsequently suffers because of this. What should have been a sustained helping of tension just becomes a bit tiresome, something you want over and done with at least 10 minutes before you actually get to the end.

Writers Mikki Daughtry and Tobias Iaconis (who previously wrote Five Feet Apart together, this is their first horror movie) seem to know what is expected of them, and I'm curious to know how much of this is their own creation and how much of it was shaped by the producers who wanted another hit entry in the ever-expanding Conjuring universe. They don't do a terrible job at all, considering this is their first foray into the horror genre, although the simplistic plot should have been fertile ground for some much better, scarier, set-pieces.

Far from the worst of these movies (that would still be The Nun), this is also far from the best. It just feels like some kind of place-holder, something to throw out as a treat for audiences in between the titles expected to do bigger business. 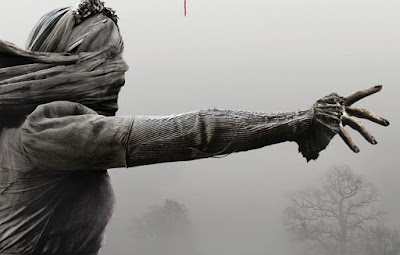