How bad is Holmes & Watson? Considering how much is was roundly battered by critics, and anyone brave enough to go and see it at the cinema, could it really be THAT bad? Yes, yes it could. And I can say this with a degree of confidence, having been one of the few people to have now seen it twice.

The first time doesn't really count though. When I first watched this movie I was laughing aloud at a number of moments. I'd also taken an excessive amount of valium before a short flight (I'm just a nervous flyer, and it turns out I wasn't listening to my wife when she reminded me of the recommended dosage of something I wasn't used to). But you can certainly take that as a different view of the film. It will make you laugh if your brain has been suitably altered by some substance that keeps you in a very good mood, be that alcohol, medication, or your favourite Doritos.

So, for the purpose of this review, I am going to focus on my second, most recent, viewing. My brain was not altered in any way (beyond the usual warping), although I definitely wish it had been.

Will Ferrell plays Sherlock Holmes, John C. Reilly is Doctor John Watson, his constant sidekick, and their latest adventure involves the dastardly Moriarty (Ralph Fiennes) and a plot to kill the Queen of England (Pam Ferris). That's about all you need to know, other than the fact that Kelly Macdonald is Mrs. Hudson, and Rebecca Hall and Lauren Lapkus play two women who turn the heads of our detecting duo.

It has been a decade since Guy Ritchie entertained audiences with a Sherlock Holmes that mixed the traditional elements with some fun cinematic updates (the "Holmes-vision"). We have had Sherlock since then, and also Elementary, both shows that have smartly updated the famous detective for modern viewers, while retaining a lot of the little details that make Sherlock so quintessentially Sherlock. So Holmes & Watson feels like too little too late as soon as it begins. That would be fine though, as long as writer-director Etan Cohen had some good enough gags to make it worthwhile. Sadly, that is not the case.

Cohen seems to rely on the chemistry between Ferrell and Reilly (used so effectively in their previous comedy work), but that's not enough on this occasion. Not when the script is full of unfunny jokes transposing modern habits (selfies, drunk text messages) into the period setting, numerous gross-out gags that fall flat, and sequences that make use of that aforementioned "Holmes-vision". The one time I smiled was due to a fun cameo towards the very end. Nothing else really works, one or two very minor chuckles aside.

Ferrell and Reilly are quite irritating in the lead roles, Macdonald is the highlight of the film, and Fiennes at least manages to get paid for a relatively short amount of screentime. Ferris is very game in her royal role, Hall almost comes out of the whole thing with her dignity intact, but Lapkus is undone by the fact that she has to match Ferrell at his juvenile antics. There are also small roles for Rob Brydon (who is actually a good fit for Inspector Lestrade), Steve Coogan, Hugh Laurie, and that great cameo star.

I am going to give this a fairly generous rating, considering how well it amused and distracted me while I was on valium and trying not to think about anything that could send me plunging to my death. But don't let that fool you into giving this a try. Even Sherlock Gnomes was better than this. 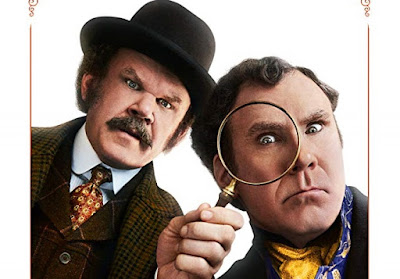