A lot of people loved Creep when it first appeared in 2014. I can definitely see the positives. It was independent cinema done right, in terms of main characters and the blend of naturalistic performances and everything feeling a bit off, but it also suffered from a couple of major flaws. Like so many other found footage movies, it was hard to buy into the fact that someone would keep filming while things started to get crazier. And it was just a bit too lightweight.

Creep 2 feels like a far superior sequel, despite having made the smallest of changes to the concept. Mark Duplass is back in the main role, calling himself Aaron, a serial killer who seems to derive more pleasure from the build up to the murders than the actual act itself. He has hired someone this time around, Sara (Desiree Akhavan), to document what he says will be his final video. And so begins the mind games.

I can't quite put my finger on the reasons why, but this felt easier to buy into than the first film The character of Sara is someone desperate to try and boost the viewing figures of her small internet show, so the combination of the fee and watching something play out that may draw some good traffic makes her feel like someone who can tolerate more nonsense than other people may put up with. There's also the fact that we now know the main character, unless you decided to go wild and watch this without having seen the first movie. We know that he IS a killer, and that is also clarified in the opening scene here (which basically gives a good reminder of his M.O. and manner within the first few minutes).

Director Patrick Brice has less to worry about here, not being also onscreen as he was in the first movie, and that also seems to factor in. Despite working from an outline (by Brice and Duplass), and despite the fast and loose improvised nature of most of the scenes, this feels like a tighter film all round.

It helps that there's a better, stranger, dynamic between the leads here. Duplass is still as excellent as he was in the first film, often coming close to being gleeful as he peppers his lies with some complete honesty that the person recording him just doesn't believe, and Akhavan (who has done great work on the other side of the camera, having written and directed the excellent The Miseducation Of Cameron Post) proves to be a surprisingly good match, becoming more and more intrigued by her subject as he shows more and more of his . . . oddness.

If you enjoyed Creep then you're going to enjoy this. More importantly, you may enjoy this even if you didn't enjoy the first one that much. The construction of the film may be enough to put some off, but the performance from Duplass alone makes this a brilliant watch, and he's created one of the best new killers in the past decade. What's more impressive is that he's managed it simply by being a brilliant actor.

Creep and Creep 2 are both on Netflix. A perfect little double-bill to warm you up for your October horror movie viewings. 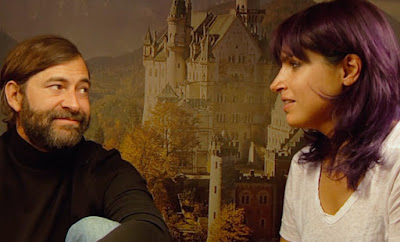