The Chronicles Of Narnia: The Voyage Of The Dawn Treader (2010)

I had to look up some figures for the Narnia movies before I began writing this review. According to Box Office Mojo, the first film had a production budget of $180M and made a shade over $745M worldwide. Not bad. The second film had a production budget of $225M and made just under $420M worldwide. And this film had a production budget of $155M, bringing in a worldwide take of just over $415M. How the hell the Prince Caspian movie ended up costing $225M is beyond me, but it seems clear that the series was scuppered at that point. Which is a bit of a shame. Because while The Voyage Of The Dawn Treader ended up making the least at the box office, it's a contender for the best of the three films, taking two main characters and throwing them almost immediately into a wild adventure that involves dark magic, a hunt for special items that can be used to stop an evil force, a dragon, and much more.

Lucy (Georgie Henley) and Edmund Pevensie (Skandar Keynes) are miserable, staying at the home of relatives, including a most horrid cousin, Eustace Scrubb (Will Poulter). It doesn't take them long, however, to get back to Narnia, this time through a painting of a sailing ship. And the astonished Eustace ends up there with them, meeting Prince Caspian (Ben Barnes) and his crew, and soon seeing sights that convince him he must be hallucinating.

I'm not going to beat around the bush here. I liked this film more than the previous two Narnia adventures. There are still some problems. None of these films work as well as they could, but this one comes the closest, and that is despite an adventure that focuses on the two youngest, and previously most annoying, members of the Pevensie family.

Henley and Keynes both do better here than they have done previously, obviously improving slightly with each movie in the series, due to the script helping them out and the fact that they have grown up a bit. Barnes is still absolute fine as the courageous and good-hearted Prince Caspian, and Gary Sweet does pretty well as his right hand man. There's no Eddie Izzard returning to voice Reepicheep so we get Simon Pegg instead. He's fine, despite the fact that his vocal performance feels like a slight step down from Izzard's fun turn. But it's Poulter who steals a handful of scenes, even when he's being an absolutely slappable pain in the backside for the first third of the film. He's entertaining to dislike, and then gradually becomes easier to like as the story allows him to be changed by everything he experiences.

It's Michael Apted sliding into the director's chair this time, working from the script by Christopher Markus, Stephen McFeely, and Michael Petroni (the other newcomer), and he does a nice job of following on from the previous films, in terms of the look and feel of the thing, while taking viewers in a slightly different direction. There are times when this feels more like a Pirates Of The Caribbean movie (and I know not everyone will view that as an improvement), thanks to the menagerie of creatures, the action sequences, and the nautical nature of it all, and times when, just occasionally, it feels like a film that could have been just as much fun with a lower budget and some lovely stop-motion work in place of the CGI, in the vein of an old Harryhausen flick.

It's a shame that this is where the series ended, considering the fact that there were other adventures fans of the books may have wanted to see, but it's also not a bad thing that it finished on a such a relative high note.

And, as a recurring way to end these Narnia-focused reviews, can we all just agree that Aslan is a Superlion who could always help everyone a lot sooner than he does? Bloody poser, just waiting for his big moment in the finale to save the day and then pretend it was a close call.*

*I did warn you that I would also end this Narnia review with this statement.

You can buy the boxset here.
Americans can get the movies here. 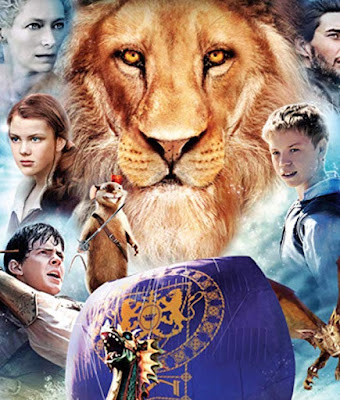