Perhaps most easily viewed as the antithesis of Brief Encounter, this look at love, marriage, sex, and loss oozes quality from start to finish. It might look dreary throughout, a deliberate choice, and the exploration of the main themes may be quite depressing, but it's a fantastic showcase for the talents of the oft-overlooked Rachel Weisz.

Weisz is Hester Collyer, a young woman stuck in a marriage to Sir William Collyer (Simon Russell Beale) that doesn't satisfy her. This is her excuse for beginning an affair with Freddie (Tom Hiddleston), a dashing RAF pilot who is trying to make the most of his time after doing his part to help win the war. Unfortunately, Freddie isn't as committed to the relationship as Hester, although how much of Hester's contribution comes from love, how much is lust, and how much from a sense of duty is hard to tell, especially as her husband, who has refused to give her a divorce, does his bit to allow her a way back to her marriage.

Based on the play by the prolific Terence Rattigan, The Deep Blue Sea is directed by Terence Davies, who adapted the material for the screen, in a way that dances between the big outbursts and the quieter moments of sadness. It mimics the extreme highs and lows of such a relationship, and does so without inadvertently turning the whole thing into some kind of parody of this kind of thing. That's easier said than done, considering the oh-so-Britishness of it all, the difference between what characters try not to say in public and what they shout aloud in relative privacy, and the old-fashioned values at the heart of it (and, no, those values are not shown as necessarily being any good).

When I mentioned Weisz being oft-overlooked I was mainly referring to my own view of her, but I also don't see her praised enough by film fans when general discussions are taking place. That's a shame, because she's almost always very good. Her skill is particularly noticeable here, playing a woman who feels the need to supplicate herself as she tries to keep hold of a man she loves, even though he doesn't feel things as strongly as she does. Hiddleston works well in the opposite role, happily revealing a colder and more cruel persona as he tries to distance himself, all juxtaposed alongside the sweeter moments in which he uses his charm and attractive smirking ways. Beale also does very well, taking on the least interesting of the three lead roles and allowing his character to regain your sympathy once his initial anger has abated.

It would have been very easy to push everyone here to go bigger, to take every scene to a point at which it starts to hammer you over the head, but Davies is the right person for the material, keeping things nicely quiet and underplayed throughout, the occasional Hiddeleston outburst aside (and I don't think anyone can keep Hiddleston from having an occasional outburst). 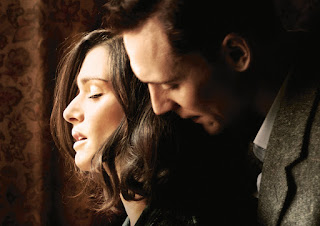