I was fortunate enough, if you can call it that, to spy this title when I was browsing Amazon Prime for a viewing choice this week. Wondering if it would be some kind of sex comedy based in the world of shows like Strictly Come Dancing, I decided to look at some of the details. I saw that it starred Amber Benson, a name that rang a bell. "Oh," said my wife, who had been watching me in amusement as I rushed to my usual stance of firm indecision, "she was Willow's girlfriend in Buffy, and she was in that film you watched that had her mourning Ron Jeremy." My wife retains some bizarre snippets in her brain, and is rarely wrong. Today was no exception. I had enjoyed Benson in both Buffy The Vampire Slayer and One-Eyed Monster. And so the decision was made.

It was a bad decision.

There's a core idea here that could have been decent. The basic plot concerns two women (Donna, played by Benson, and Christi Ann, played by Kristen Kerr) who decide to head out and pick up a couple of male prostitutes. They end up picking up Joe (Johann Urb) and Stanny (Stevie Long), two men who ARE NOT male prostitutes, but could do with the money when it comes up in post-coital conversation. This leads to the women agreeing to an arrangement that should benefit them all. They will let the men stay in their pool house, where they can enjoy an easy life in between any time they are called upon for sex. But, as we've seen explored in movies many times before, can sex without feelings ever really last as a good thing?

I'd be interested to see what this material could have looked like, filtered through a female gaze. Director Joel Viertel doesn't manage to keep things balanced, although he's definitely held back by the script, which was written by Long (something that seems so obvious now, considering how his character is viewed throughout the film . . . let's just say that he's most definitely packaged as the wise alpha male). One or two amusing exchanges aside, Strictly Sexual does nothing to make the characters engaging enough, or even make the conversations and dynamics more interesting.

Benson does okay, hampered by the fact that her character quickly turns into someone who turns on those around her, especially when she suspects that she's about to catch a dose of icky feelings. She's the best of the bunch anyway. Kerr and Urb are a bit weak, but it's Long who really throws off the balance. If his writing is . . . problematic, to put it as kindly as I can, then his acting makes it all a lot worse. Although far from the worst actor I have seen in movies, the combination of his poor performance and poor dialogue makes almost every minute that he's onscreen slightly painful.

In summation, Strictly Sexual is a film that desperately wants to present itself as something honest, modern, and risqué. Unfortunately, it begins to spiral early on, nosediving into a mire of overdone melodrama and false-sounding attempts to sound cool and progressive that it never recovers from.

There's an overpriced DVD that Americans can buy here. 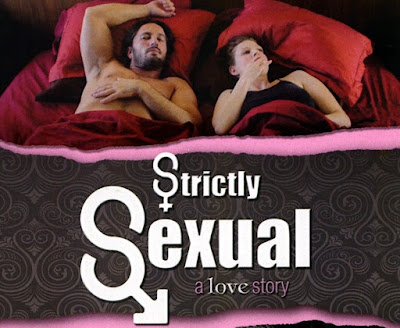