If there was one movie that came to symbolise the excess, and potential waste, of blockbuster movie productions of the 1990s, it was Waterworld. Supplying cinema fans with plenty of gossip before we'd even seen one main scene, it was the film that caused more strife between star Kevin Costner and director Kevin Reynolds, the film that had the biggest budget of all time (until James Cameron gave us Titanic, which then opened the floodgates, no pun intended, for budgets to go up and up and up), and the film that allowed everyone to (unfairly, in my view) knock Costner down a peg or two.

The sad thing is that the film itself, without taking everything else into consideration, is actually pretty good. I'd go so far as to call it a great action adventure. But that's easy to forget when the final product has been long overshadowed by that troubled reputation.

The plot is pretty simple. Costner plays the Mariner, a lone traveller on an Earth that has long been covered in a deluge of water, so much so that any notion of dry land is nothing more than a legend. But one little girl (Enola, played by Tina Majorino) may have the location of dry land, in the form of a skin tattoo, and she ends up on the Mariner's boat, along with her guardian, Helen (Jeanne Tripplehorn). This makes them of interest to a marauding gang, the Smokers, and their leader, Deacon (Dennis Hopper).

I thought long and hard about this, I think long and hard about every statement I make in my reviews (even if it doesn't appear that way), and I stand by the fact that Waterworld MAY be a contender for the best physically-realised movie environment onscreen. A lot of the screentime is taken up by our leads floating on the water, true, but there's an astonishing atoll set that is the focus of the action in the opening third of the film, fantastic design work on the main vehicle that belongs to Costner's character, and a wonderful reappropriation of the Exxon Valdez as a main HQ for the villains. There's not one moment in this movie that takes you out of it, in terms of the look and the production design, no matter how silly some of the plotting may be.

The script, by Peter Rader and David Twohy, may be little more than Mad Max on water, but that's not a bad thing to aim for when you're out to deliver some post-apocalyptic, stunt-filled, action. And everything is directed well by whichever Kevin you want to give the most credit to. This may have been the most expensive movie of all time, for a while, but you have to admit that you can see pretty much every dollar onscreen (well . . . apart from the thousands of dollars that it cost for every night that Costner stayed in his villa, which also had a chef and butler, apparently). Every set-piece is grand and impressive, without tipping over into the overdone and tiresome style we so often see in modern movies that have no limits on the spectacles they can provide, thanks to the computer tools at their disposal.

None of the cast members are doing their best work, but neither are they doing any of their worst. Costner does the strong and silent type well, Tripplehorn does as much as she can while not being given a lot to do, and Hopper is just about as fun a villain as you could wish for in this kind of fare (a scene with him trying out a replacement eye still makes me laugh harder than many big gags in comedy films). Majorino acts well opposite the adults, Michael Jeter is fun in a small role, and Gerard Murphy is another crafty villain in league with Hopper and co. The list of people in much smaller roles also includes a number of familiar faces: Leonardo Cimino, Robert Joy, Jack Black, Kim Coates, and one or two others.

Does it have flaws? It sure does. It's overlong, even in the shortest version available, it often misses the mark when it comes to the moments that aren't full of action, the computer effects, when on display, are mid-90s computer effects, and the ending is, well, it's a bit anti-climactic. But none of that is enough to spoil a movie that aims to provide viewers with a thrilling cinematic adventure. If you haven't seen it, or haven't seen it in years, then do check it out.  Maybe you'll agree with my opinion of it. Maybe enough time has passed, and the tide has turned for Waterworld.

You can buy this fantastic set here. 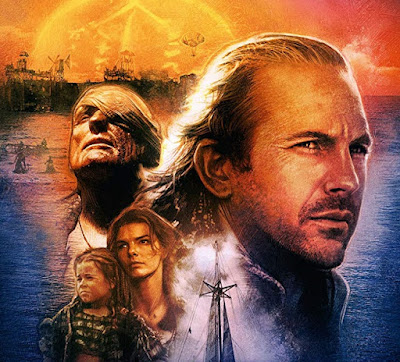